Family of Steel: The Strasbaughs 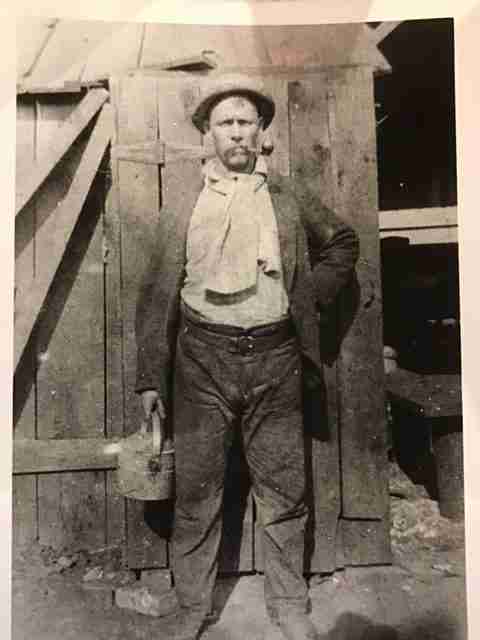 The first John Benjamin Strasbaugh pictured with his lunch pail.

Editor’s Note: Three generations of the Strasbaugh family worked in the steel mill at Sparrows Point. Gloria Strasbaugh, the wife of the third John Strasbaugh, answered some questions about her family in an email interview. In the edited excerpts* below, she recalls her family’s history and their involvement with the steel mill.

Who were the three John Strasbaughs?

“The first John Strasbaugh mentioned above was a blue-collar worker in the steel mill. We have no idea what his job might have been but he is dressed like a laborer not a supervisor. He came from Steelton, Pennsylvania in 1892 seeking work as so many did.”

“John Strasbaugh Senior [The second John Strasbaugh who worked at the steel mill from 1926 until his retirement in 1971] was always in a supervisory capacity in the Galvanizing Department of the Tin Mill. This allowed his family to live in a home in Sparrows Point…As part of his job, he traveled the world—we suppose introducing the products to potential customers. He traveled to Asia, Japan, and the Philippines. Later on in life he became a metallurgical service engineer and only traveled within the United States. From what we know, these jobs took their toll on his health as there was a great deal of responsibility and pressure.”

John Senior and Miss Kathryn Herr of H Street on their wedding day in 1933.

“John Strasbaugh Jr. [The third John Strasbaugh] had seen the pressure his father was under and determined he did not want to work in a supervisory capacity. In 1963 he became a metallurgical trainee and a machine operator in the General Lab Plate Mill. It was a job that required standing on your feet in front of a machine all day, often working 16 hour shifts, weekends, and holidays. He retired in 1999.”

What was the relationship between John Senior and John Junior like?

“John Senior and John Junior both worked at the same time but in different mills and different jobs so they did not interact on the job site. Most of those years they lived in different residences so they were not in daily contact. Although, it’s highly possible that since one was in supervisory capacity and the other was a union worker there could have been some spirited discussions once in a while.”

How did the mill affect family life?

“Working at the mill affected your family life greatly. For John’s father it was the travel and the pressure. For John Junior it was the shift work, weekend and holiday work, and a schedule that you only knew two days before it started. Everything in your daily life had to be planned around shift work: meals were different depending on the shifts and children had to try to be quiet while dad slept in the daytime. Dad was also unable to make many sports events with the children or things at school unless he was on the right shift. Weekends were never usually available for family outings and the two days off a week were often not together—it could be a Monday and a Wednesday or a Tuesday and a Thursday. 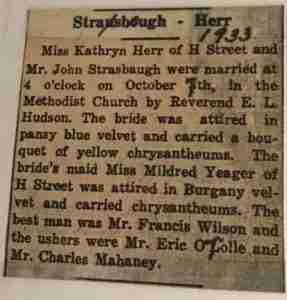 A newspaper clipping describing the wedding between Kathryn Herr and John Senior.

How did the mill’s closure affect your family?

“He [John Junior] was only retired a couple of years when they went bankrupt [Bethlehem Steel went bankrupt in 2001] and all benefits were lost including the pension… We basically had no notice about the loss of health insurance, we heard it on the national news about five weeks before it was to happen. Barbara Mikulski will always be my hero because she went to bat for us and actually helped create a special health insurance we could get which was greatly subsidized.”

Was it upsetting when the town was demolished in 1973?

“Yes, it was very emotionally upsetting to see the town plowed under. Anyone who ever lived there felt the same way. It was history destroyed. We always felt sad that we could never take our children there to see where their father grew up in the wonderful town everyone talked about.”

How did you feel about the mill closing down?

“When I hear of industries closing and workers out of a job it always touches my heart. There seem to be few steel mills that even exist anymore. We always thought that Bethlehem steel would be there forever.”

*This excerpt has been condensed and slightly rearranged for clarity.

See what Sparrows Point was like for the first John Strasbaugh here or learn about other ways the museum provides a space for people connected with the steel mill to tell their stories here.