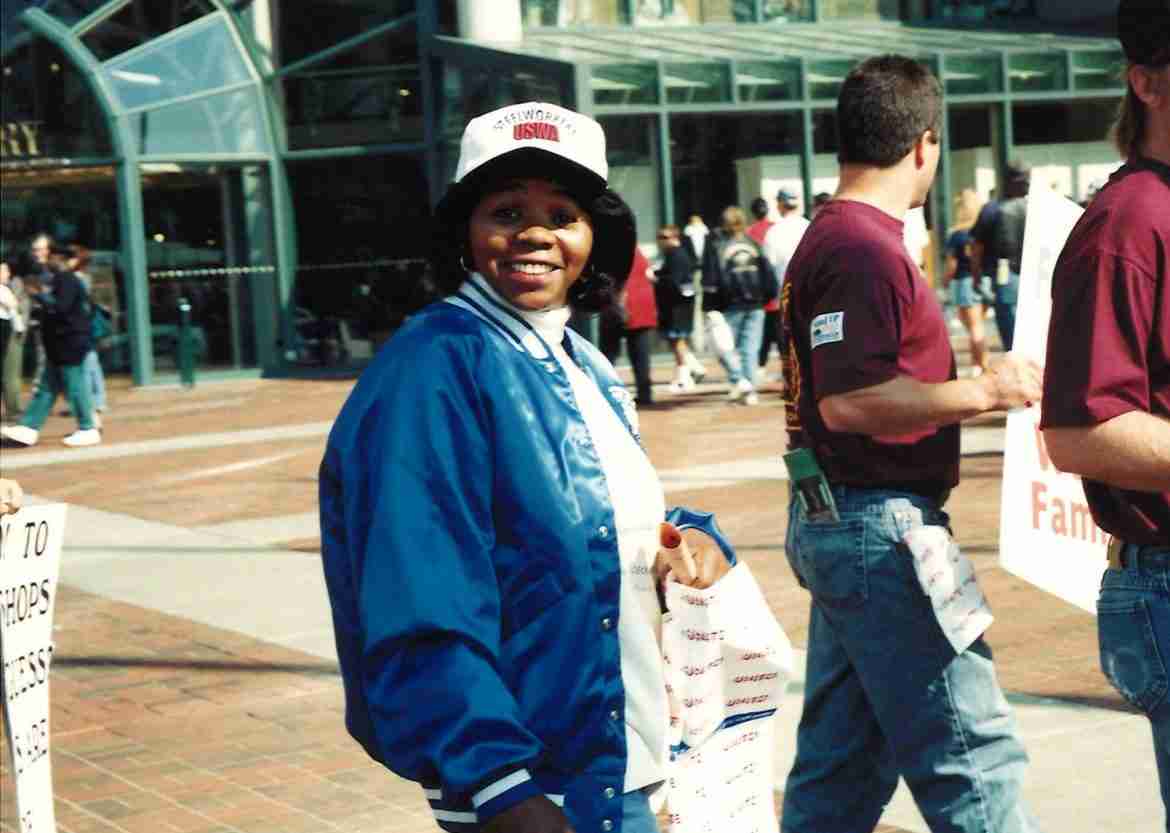 Bettye Ridgley at an SEIU protest in the 1990s.

Bettye Ridgley began her journey at Sparrows Point in 1978 as a mechanical helper in the hot strip mill. “We were what you called ‘go-fors’. You know, we’d go for the tools, go for the coffee.”

Four or five months later, Bettye was laid off from the mechanical unit. When she was recalled to work though, she was given a different job: “I should have been called back to the mechanical unit, but I was not. I was put in a labor gang.”

Being in the labor gang meant a lot of dirty, hard work. “Shovel, shovel and sweep… cleaning the mill, cleaning up oil spots or grease spots, hosing down some of the equipment, painting, shoveling snow, all of that.”

Bettye says that men used to tell her she “was taking a man’s job.” She didn’t stand any of it though. “I’d tell him how it was,” she says with a bit of a grin. “Come on, I deserve a job too.” She also points out that the men weren’t all bad. “It gave me a lot of insight into people, some of the men. They worked hard…It just took a while for them to warm up to you on a human level.”

Her journey in the mill and the union

After working in the labor gang for a few months, Bettye “bid out” for an opening in the crane department. She began training as a crane operator and stayed in this unit for the rest of the 25 years she was at the mill.

It was in this unit that Bettye began moving up in the union and in the political world. “In June of 1994, I decided I was going to run for Shop Steward of the Crane Unit and I got nominated.” Shop stewards were the union representatives for their unit. Whenever someone in her unit had a grievance, they would bring it to her. Bettye won the election with 29 votes, eight more votes than her closest runner up. Out of five nominees, Bettye was the only woman. The other four nominees were all men. 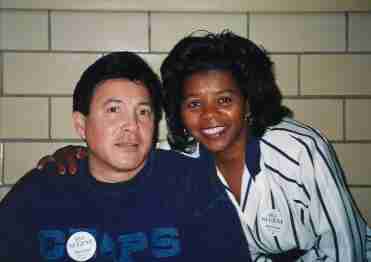 Bettye and a fellow steelworker.

As shop steward, Bettye was now working at the union office Monday through Friday. “That kept me out of the mill Monday through Friday, but because of the overtime agreement I was low on overtime…Now, I could not work for the union and the company within the same day. So what they would do is I would finish up with the union on Friday at 5 o’clock. I’d go home, I’m chilling, and they would call me to come in to work at midnight. So, I would go in and work at midnight.” When she got off at 7 in the morning the company would offer her a 7-3 shift. It all began again Saturday night.

The union and the end

Consistently, Bettye’s comments returned to the union. Although she does note that the union might not have done all that it should have done—after all it was the union’s job to ensure she was placed back into the mechanical department after her first lay off and they failed to do that— she’s a staunch supporter of unionization. “The union afforded me the ability to have a good life… It gave me a lot of opportunities.”

Bettye continued to work hard and take those opportunities. She became Secretary, and later Chairman, of the Political Action Committee for Local 2609. Eventually, she became the Legislative Liaison for District 8 Steelworkers, which represents steelworkers from the states of Kentucky, Maryland, Virginia, and West Virginia. She attended the National Democratic Convention several times and worked with multiple influential politicians. 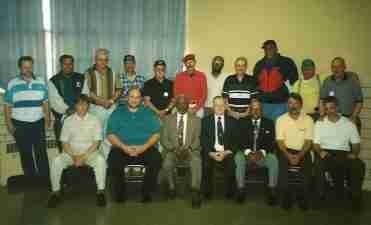 The officers of Local 2609, Bettye’s labor union. Burt Dixon, the president of 2609, is pictured in the first row, third from the right.

Even when the mill was sold in 2003, Bettye managed to find the silver lining in the catastrophe. Employees were offered training to help them find new jobs, severance pay, and medical benefits for two years. “A win-win for me.”

She went to Coppin State University and graduated in 2005 with a Bachelors in Liberal Arts and Psychology. In 2006 she got a job in the Department of Labor, where she worked until 2009.

When asked what she wants people to know about the mill and her story, Bettye Ridgley’s words echo those of other steelworkers. “Talk about a fantastic journey. No day was the same, it was just fantastic.”

Bettye would like to thank David Wilson, Eddie Bartee, Don Keller, Burt Dixon, Billy Thompson, and numerous other union “men of steel” who helped her and so many others along the way. “I don’t want the union side to get lost,” she says. “The union provided opportunities for all steelworkers.”

Read about other women of steel on our blog or check out the Women of Steel exhibit along Key Highway at the BMI and learn about how it was adapted for the pandemic here.