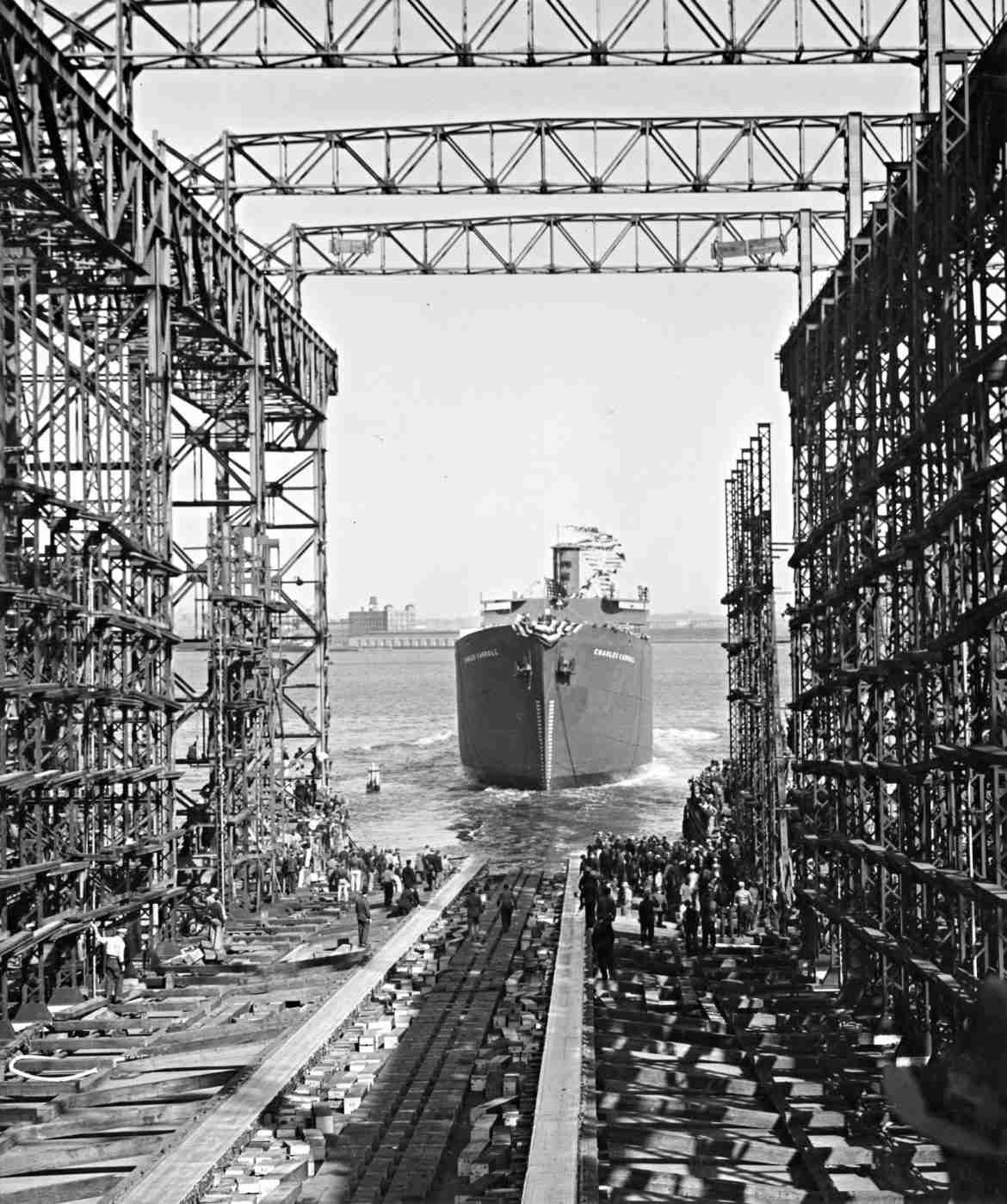 Being a mid-century born native Baltimorean I was always well aware of “The Point.” I had an uncle that worked there, and a neighbor or two as well. As a kid I knew that they worked there because of the orange dust on their cars or because they had more vacation days than any of the other fathers in the neighborhood. I knew that “The Point” was a steel mill, they made steel and employed a lot of people, and that Baltimore was very proud that it was part of our community. 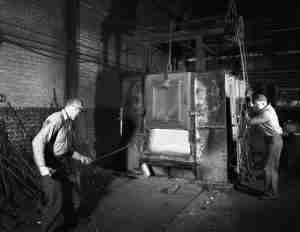 This 1955 photograph shows workers inside the shipyards.

The part of the Bethlehem Steel Baltimore operations that I was less aware of were the shipyards. This despite the fact that the southern shores of the Inner Harbor were the home of Bethlehem’s Key Highway yard.

For the last several months I have been processing and cataloging the BMI’s Bethlehem Steel collection. As I worked, I found myself reading the materials or closely looking at the photos I was processing. I became fascinated by this collection of shipyards – Sparrows Point, the Baltimore Yards, and Fairfield – and the contributions they made to local and global commerce as well as the major role they played in national defense.

In a series of posts we’re going to take a look at each of these yards: their origins, their histories, and what they are now. Since they may have been the most visible because of their location I’m going to start with the Baltimore Yards: Key Highway and Fort McHenry.

The Baltimore Yards refer to two separate shipyards. The Key Highway yard was located on the northeast side of Federal Hill near Baltimore’s Inner Harbor, and the Fort McHenry yard was just downriver on the Locust Point peninsula adjacent to Fort McHenry.

The history of the Key Highway yard, which was also referred to as the upper yard by Bethlehem Steel, begins with the Skinner family. William Skinner Jr. and his brother Jeremiah came to Baltimore from Dorchester County in the 1820s. They were boat-builders on the Eastern Shore and they came to Baltimore to build and repair wooden ships. They established the Skinner yard under the north slope of Federal Hill. In 1845, William sold his interests in the company to his brother and purchased his own yard on Cross Street, the eastern slope of Federal Hill. William’s top-of-the-line operation become well-known, if not famous, for its sailing ships and occasional steamboat contracts.

Baltimore has always been considered one of the great seats of American shipbuilding. It holds a notable place in shipbuilding history as the birthplace of the world-famous American “clipper ship,” a type of sailing vessel that dominated long and short ocean voyages until the general introduction of steam propulsion. It is posited that the first clipper ship was built in Baltimore at the shipyard of William Skinner.

When William died, his brother and sons–Jeremiah, James, George, and William Henry II–took over the business and renamed the company the Wm. Skinner and Sons Shipbuilding and Drydock Company. Through  acquisition of other small shipbuilders in the area, their Key Highway yard eventually grew into a 35-acre shipbuilding complex. 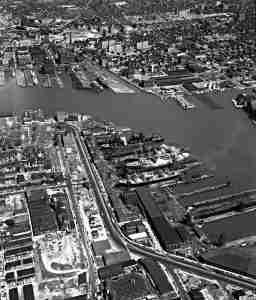 A 1963 aerial view of the Key Highway shipyards, from the museum’s BGE Collection

The outbreak of the Civil War brought on a demand for sailing vessels and great prosperity for the Skinner operation and the entire shipbuilding industry. The Skinner yard continued to thrive building vessels of all types including barks, schooners, and the very popular Bay Steamers. William Henry Skinner II died in 1891 and his son Harry George Skinner took up the mantle. Harry is credited with advancing the shipyard into the 20th century. Seeing that larger and larger vessels were being built in the 1890s, the company embarked on constructing a large graving dock to handle ship building and repair. Reported to be the largest at the time south of New York, the dock opened in November 1901. The Skinner yards became known as the upper and lower yards of the Skinner Shipbuilding and Dry Docks Company.

The BMI holds two significant artifacts from Skinner’s upper yard. The steam tug Baltimore was built at the yard in 1906 and is likely one of the first non-wooden vessels to be built by Skinner. Harry G. Skinner’s Baltimore II replaced the original former city tug, Baltimore I, which was built in 1857. Both steam vessels served the Port of Baltimore, City, and Chesapeake Bay with distinction.

The second significant artifact from the upper yard is our recently restored 1942 era Clyde Model 17 DE 90 whirley crane. This crane was used in the Fairfield yard in the 1940s and later moved to the upper yard on Key Highway. The crane sat on Pier 3 at Key Highway and was used throughout the 1940s and into the 1980s. After the closing of the yard in 1982, it was donated to the museum and installed on our campus in 1991.

Located on the Locust Point peninsula adjacent to Fort McHenry, Bethlehem Steel’s Fort McHenry yard (also referred to as the lower yard) got its start in 1879.  Prominent Baltimorean John W. Garrett and his sons Robert and T. Harrison organized the Baltimore Dry Dock Company and built a graving dock that could float a vessel 470’ long by 80’ wide. It is considered to be the first modern graving dock built in the United States. Garrett and his sons leased the graving dock to boat and engine builder Malster & Reaney, who reorganized as Columbian Iron Works and Drydock and began building iron and steel hulled vessels.

Columbian Iron Works and Drydock benefited from a maritime revival initiated by presidents James Garfield and Chester A. Arthur. It won a contract to build the USS Petrel, an all-steel gunboat for Admiral George Dewey’s squadron that was launched on October 13, 1888. During this time, the Columbian yard also built the SS Maverick, the first bulk oil tanker to be built in America for the Standard Oil Corporation. The yard is also known for being the home of the Argonaut, the first successful commercial submarine launched in 1897. Between 1895 and 1898, the yard also built 3 torpedo boats: USS Foote, USS Rodgers, and USS McKee.

In 1915 the Skinner properties were forced into receivership and acquired by a new form of Baltimore Dry Dock and Shipbuilding. This company was bought out by Bethlehem Shipbuilding Corporation (later merged into the Bethlehem Steel Company) in 1921. They turned the combined yards into repair facilities to complement their shipyard at Sparrows Point. With the outbreak of World War II the Baltimore Yards were called upon to increase their productivity by participating in the United States Maritime Commission’s Emergency Shipbuilding Program.

At the beginning in the 1950s the Baltimore Yards pioneered a process referred to as “jumboizing” or “jumbosizing” a vessel. This involved cutting out the mid-body of the vessel and replacing it with a new, larger midsection that increased the cargo carrying capacity of the ship at a fraction of the cost of building a new one.

Although the Baltimore Yards were primarily focused on repair and conversion projects they were still called upon to construct new vessels. In the 1960s the yard built the very first entirely aluminum research vessel. The 106’ shallow draft catamaran R/V Ridgely Warfield was designed for use by the Johns Hopkins University’s Chesapeake Bay Institute. This vessel also played an interesting role in fighting drug trafficking as told in the book Drugging America by Rodney Stich. In the 1990s a known drug smuggler turned confidential informant convinced the Colombia drug cartel to buy the Ridgely Warfield to move drugs between Colombia and the United States. The cartel was unaware that it was a sting operation and US Customs was monitoring the entire process.

In their heyday the Baltimore Yards had four floating drydocks with lifting capacity from 10,400 to 44,000 tons and two graving yards. Together, Bethlehem’s upper and lower yards employed 1,700 craftspeople and repaired an average of 500 ships per year from all over the world. Due to global competition and changing market conditions, Bethlehem closed the yards at the end of 1982 and shifted its repair operations to the Sparrows Point shipyard.

Today the upper yard is home to the Ritz Carlton and Harborview communities, while the lower yard near Fort McHenry maintains its maritime heritage hosting several Port of Baltimore related terminals. 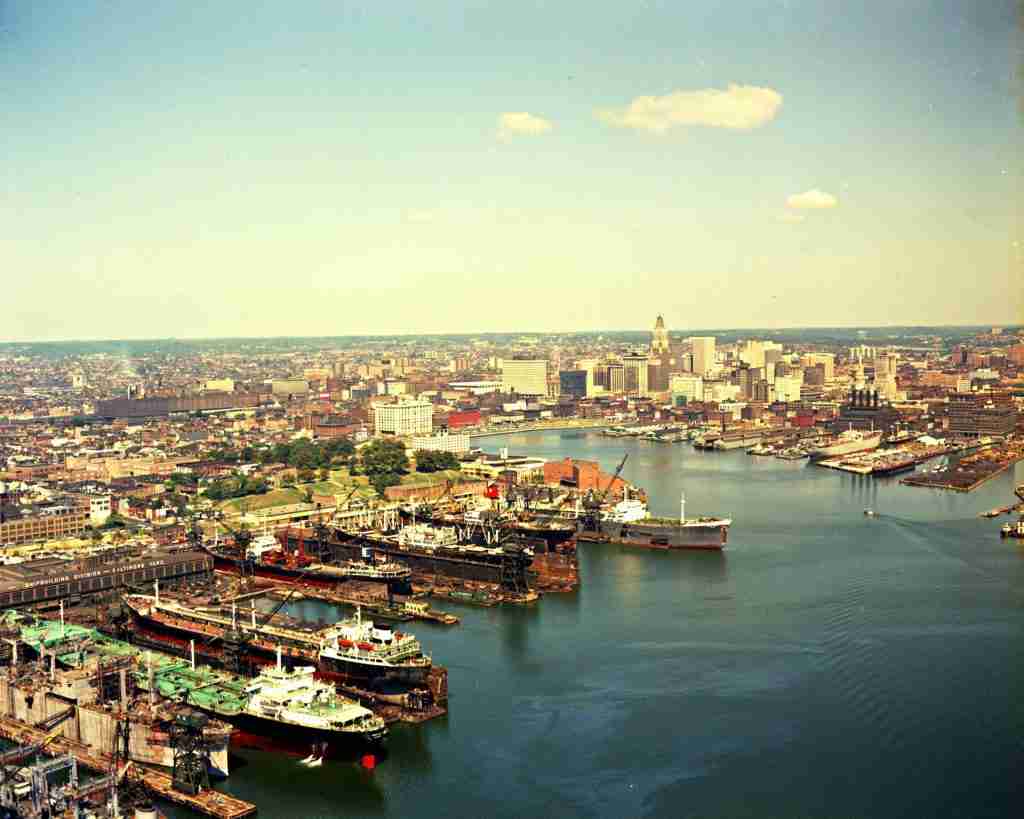 A 1968 aerial view of the Key Highway shipyards and harbor.

Many thanks to BMI volunteer Robert Pratt for his research assistance and invaluable contributions to the preservation of the museum’s collection of ship plans.

Ken Jones is a retired marketing communications executive now volunteering in our collections and archives department.