The AFRO: Baltimore’s Black Media Authority, Past and Present 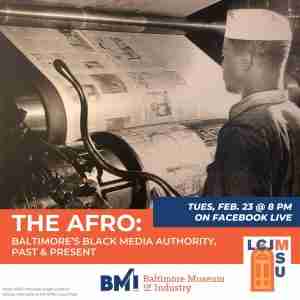 The AFRO: Baltimore’s Black Media Authority, Past and Present

Join the Baltimore Museum of Industry and the Lillie Carroll Jackson Civil Rights Museum as we hear from different voices at The AFRO, about how this Baltimore publication has shaped news coverage and public opinion since its founding in 1892 and the importance of diversity in media.

While freedom of the press was built into the foundation of the United States, it wasn’t until the mid-19th century that Black Americans had the opportunity to exercise that right, with the creation of the first Black-owned newspaper, Freedom’s Journal. After its foundation in 1827, more Black-owned publications began operating in parts of the country where slavery had been abolished and reported the reality of Black Americans, a reality that many white-owned and mainstream press ignored or falsely reported on. Baltimore, a city with a deep history of segregation, was no exception.

In 1892, John Murphy Sr., a formerly enslaved man and Civil War veteran from Baltimore, founded the Afro-American, envisioning a newspaper that advocated for civil rights and exposed discriminatory practices, while also advertising Black-owned businesses and celebrating stories of Black excellence. The AFRO is the longest running Black-owned newspaper in the United states, and remains a 4th-generation family-owned business.

About the Partners and the Program

Located on Eutaw Place in Bolton Hill, the home of civil rights pioneer Lillie May Carroll Jackson (1889–1975) is now part of Morgan State University. Lillie Jackson served as president of the Baltimore Branch of the NAACP from 1935 until 1970. Under her leadership, the NAACP membership rose from less than 200 in 1935 to over 25,000 by 1946. With the help of Carl Murphy, President/Publisher of the Afro-American Newspaper and Chairman of the NAACP’s Legal Redress Committee, the chapter succeeded in desegregating many private and public facilities, achieving equal employment for many citizens, assisted in the election of African Americans to public office, secured appointments of African Americans to leadership positions, revamped discriminatory laws, and desegregated public schools and institutions of higher education. 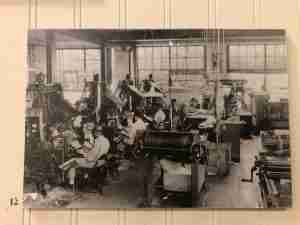 Baltimore’s Afro-American Newspaper has crusaded for racial equality and economic advancement for Black Americans for nearly 130 years. John Henry Murphy Sr., a former slave who gained freedom following the passage of the Emancipation Proclamation of 1863, started the paper when he merged his church publication, The Sunday School Helper, with two other church publications in 1892. By 1922, Murphy had evolved the newspaper from a one-page weekly church publication into the most widely circulated black paper along the coastal Atlantic and used it to challenge Jim Crow practices in Maryland. Following Murphy’s death on April 5, 1922, his five sons, each of whom had been trained in different areas of the newspaper business, continued to manage The Afro-American. The paper rose to national prominence while under the editorial control of Carl Murphy, who served as its editor-publisher for 45 years. At one time there were as many as 13 editions circulated across the country. The Afro-American’s status as a black paper circulating in several predominantly black communities endowed it with the ability to profoundly affect social change on a national scale. The AFRO continues under the fourth generation of leadership from the Murphy family.

The Baltimore Museum of Industry celebrates the dignity of work, and can provide a forum for exploring how the pandemic has impacted – and continues to impact – people’s experiences on the job. The BMI’s programs and activities highlight such issues as workers’ rights and workplace equity, providing historical context for contemporary issues that impact our community.