Fixing the Problem with Iron 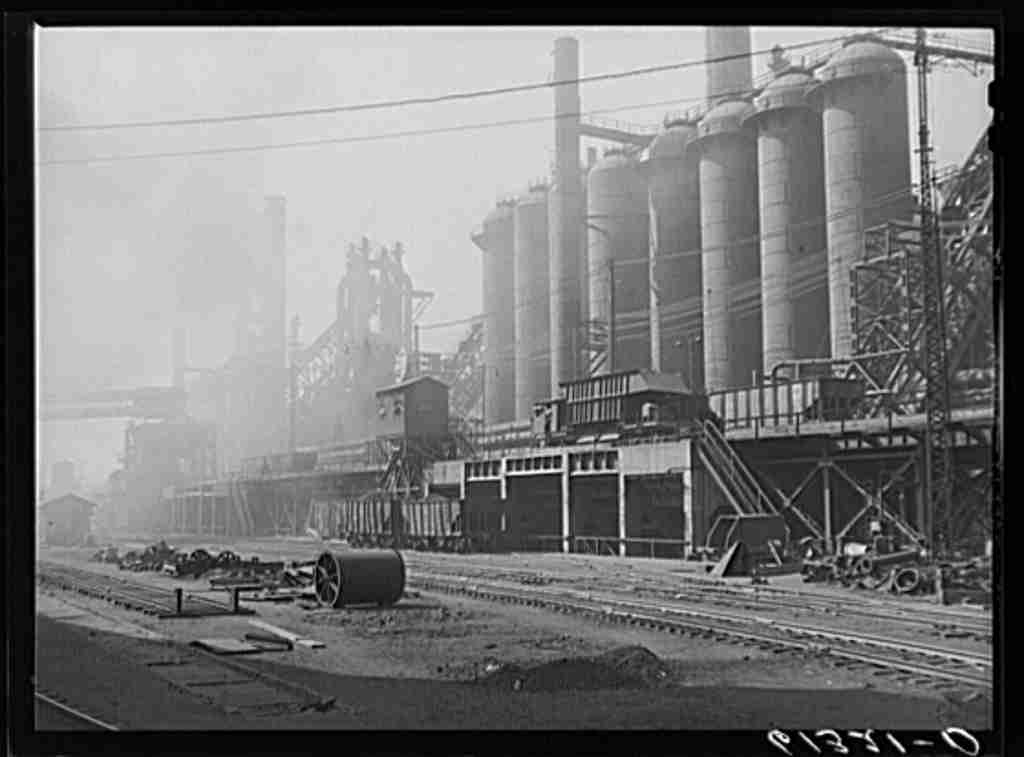 A 1940 photograph of the Sparrows Point steel mill by John Vachon, from the Library of Congress.

An overview of industrial steelmaking – by Jack Burkert

Editor’s note: For another look at the steelmaking process, check out “Steel in the Making,” a brochure published by Bethlehem Steel and now housed in the BMI’s archives.

The railroads had a problem. From their earliest days in the 19th century, the rails their trains rode on were made of iron. Iron was strong, but with increasingly heavier loads the iron rails could shatter, or at best, wear out quickly. Delays, damage, constant maintenance, and risk to life and limb were all the result of rails made of a metal that was easy to obtain, but not up to the task. Clearly, a replacement for iron was needed.

By the mid-1800’s, that replacement had arrived. The steelmaking process had been known to humankind for thousands of years. What had not been known was how to produce large quantities quickly and at a modest cost. In 1855, Henry Bessemer created the process that would bear his name–a means for making steel that would change the world. Bessemer recognized that iron had an inherent problem: although it seemed strong, too much carbon meant that it was breakable. 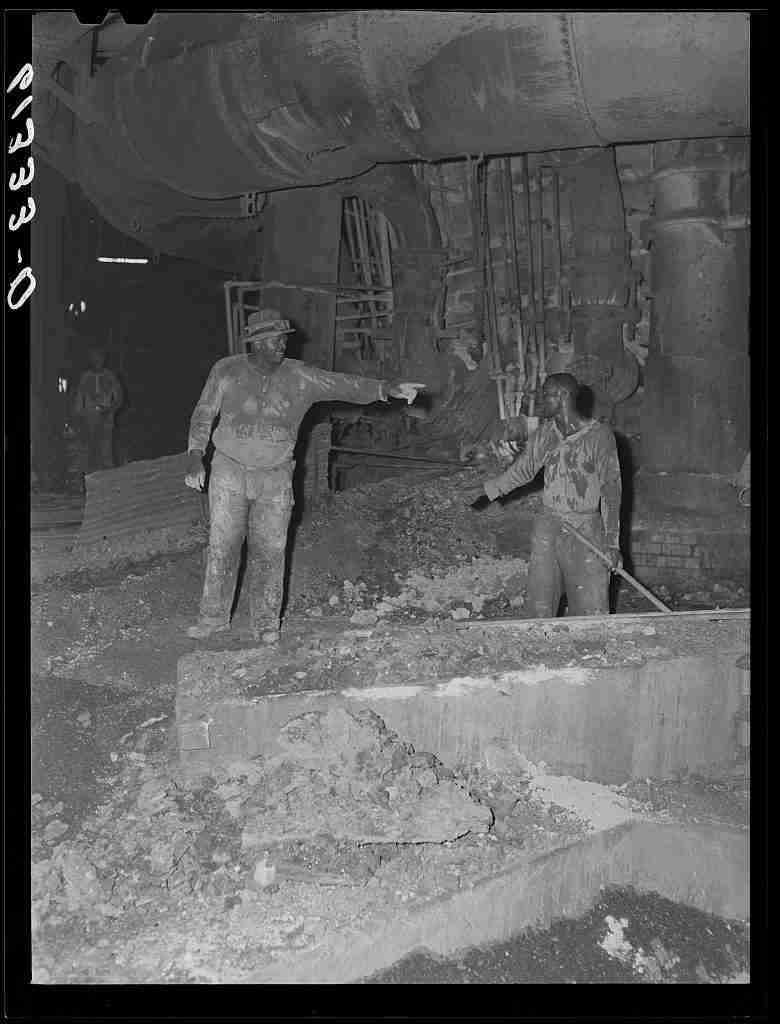 A 1940 photograph of two mill workers by John Vachon, from the Library of Congress

When steelmaking became practical, railroads saw the potential for fixing their rail problem. By the late 1800’s, the race was on to replace iron rails with steel that could last ten times as long. One of the biggest of the big railroads, the Pennsylvania, moved quickly to become a primary investor in what was to become the Pennsylvania Steel Company. The switch to steel was underway.

Obtaining the products to make steel—iron ore, coal, and limestone—usually dictated where the steel mills were located. These materials were needed by the ton and the cost of mining them and transporting them to a mill was significant. Pennsylvania Steel selected the Sparrows Point peninsula to create a steel mill competitively located near these raw materials as well as rail and shipping routes. By 1888, the Sparrows Point mill was in business. It was renamed Maryland Steel and changed hands in the early 20th century, becoming part of Bethlehem Steel.

Steel production begins with iron ore. Iron ore is found throughout the earth’s soils—including here in Maryland—as a mix of iron oxide and other impurities. The ore must be refined in a furnace, going through multiple chemical changes before becoming steel. The required chemistry changes were accomplished in early years at Sparrows Point in Bessemer furnaces. Into the top of the Bessemer goes a “charge” consisting of raw iron ore and a coal product known as “coke,”or coal which has been reduced to virtually pure carbon. A catalyst, most often limestone, is added to help the necessary chemical changes occur. In later years, other materials were added to control both the temperature and the chemistry of the mixture.

The fires inside a blast furnace increase in temperature as the “charge” descends in the furnace. The charge slowly burns and descends further into the furnace, becoming a liquid. The process then continues with the “blasting” of air through this liquid mixture, allowing impurities in the liquid mix to chemically combine with the oxygen in the air blast. Later furnaces replaced this blast of air with a blast of pure oxygen, eliminating the nitrogen found in the air.

Pouring water on hot ashes from the blast furnace at Sparrows Point. 1940 photo by John Vachon from the Library of Congress.

The duration of the blast is critical to making steel. With the furnace consuming coke—virtually pure carbon—the hot liquid mixture acquires an elevated carbon level. The carbon level must be reduced to ensure the material isn’t too brittle, too weak, or too soft. The blast of air allows oxygen to combine with the carbon in the mix, creating carbon monoxide and later carbon dioxide which escape the furnace. When it has done its work, the blast stops. Impurities such as silicon, sulfur, and manganese, as well as ash from the burned coke, form a liquid slag that floats atop the steel mixture in the furnace. This waste product is poured out of the furnace. With the vast majority of the impurities eliminated, the conversion from iron ore to steel is complete. The newly created steel is then “tapped” from outlets at the bottom of the furnace.

Improved furnaces made the Bessemer refining process largely obsolete by the early 20th century. Steel became readily and inexpensively available in large quantities. Furnaces became cleaner to operate, many utilizing scrap steel as a starting point for the mixture or as an additive to control internal temperatures. Researchers found that adding other elements to the refining process could make steel more resistant to oxidation (stainless steel) or of higher tensile strength (higher carbon levels). Many modern furnaces actually slow the steel making process. Slowing the refining process allows chemistry changes to be made to the steel mixture during refining, changes that were virtually impossible given the instant chemical changes wrought by the Bessemer air blasting process.

The steel mill at Sparrows Point now belongs to the past as does its Bessemer furnaces, the Pennsylvania Steel Company, and Bethlehem Steel. But steelmaking—changing iron ore into steel—goes on, and people continue to make steel. Today, electric arc furnaces in mini-mills roll out specialty steels: customized blends that resemble the steel of a hundred years ago only by a few common qualities. Yesterday and today, each process begins with iron ore refined by intense heat, chemical change, and the constancy of labor. These common elements continue to produce the most widely used metal, benefiting people in thousands of ways.

Jack Burkert is a senior museum educator who previously worked in the fields of education, logistics, and transportation. He resides in historic Dundalk.