A Day in the Life: The View from the Top 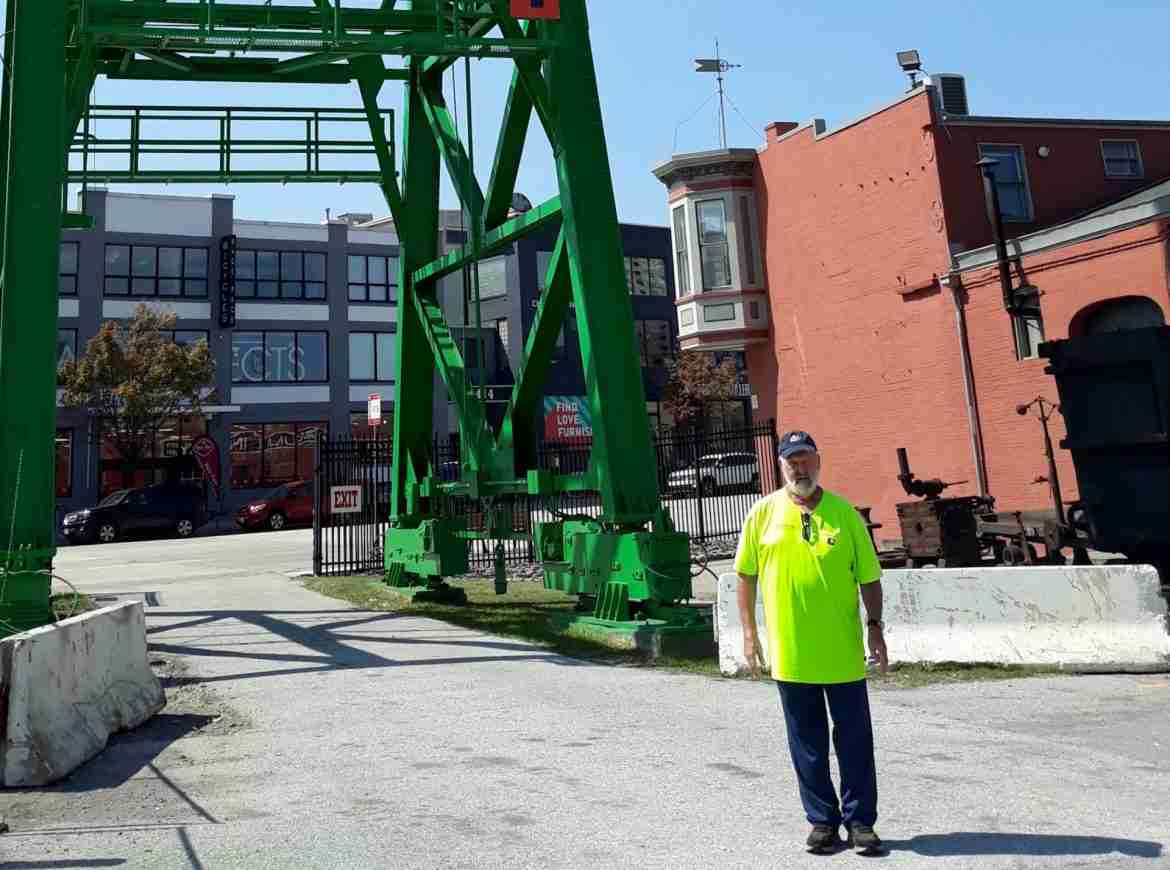 Editor’s Note: Museum staff were saddened to learn of Roy Hoover’s passing in September 2020. We’re grateful to Roy for sharing insights from his career and ensuring these memories are preserved for future generations.

“Swaying in the wind, you get used to it.”

We recently started recording oral histories of people who worked at Bethlehem Steel and/or lived in the local community. We will share some of their stories in occasional blog posts. First up: Roy Hoover, shipyard crane operator.

These photographs were taken by Roy on the job as he documented his view from the top at Sparrows Point.

Roy Hoover grew up in southwest Baltimore. Drafted into the Army in 1967, he trained as a crane operator and served in southeast Asia. Returning in 1969, he put his skills to use first at Maryland Dry Dock and soon after, at Bethlehem Steel’s Sparrows Point shipyard. He spent 30 years as a crane operator at the Point.

Like other jobs at the Point, this one had its own particular rewards and challenges.

“Every day is different. That’s what I liked about it.” Bethlehem shipyard workers not only built, repaired, and scrapped ships, they also built oil rigs, tunnels, and other structures. Crane operators executed a variety of tasks, from moving materials to a staging area at the start of a new job to transporting workers to various parts of the ship and holding them in place while they worked. “Holding people in a big pan so they can paint the outside of the ship… You gotta be alert all the time,” Hoover notes. “That’s a lot of responsibility.”

Hoover operated all kinds of cranes during his career. He insists that he had no preference (“a crane’s a crane”), but the tower cranes were especially gratifying. These 90-foot-tall behemoths could lift 200 tons—they literally did the heavy lifting around the yard.

On climbing 90 feet (more than eight stories) up to work every day: “I was 29 when I first started, I just zipped up there. We used to race up there, me and another guy.”

Once Hoover got up to the cab, he stayed there for the entire shift–up to eight hours or more. He brought his lunch and a newspaper. He had a coffee pot, electric power, “all the conveniences of home,” he laughs. Though alone, he could communicate with fellow operators and his boss via radio.

Large items needed multiple cranes to lift. Deckhouses, for example, weighed up to 450 tons. The job required close coordination, with a signalman on the ground telling each crane operator when to slow down or catch up in order to equalize the weight. To make sure they didn’t become unbalanced, operators had to work carefully. “You gotta be precise. That’s a lot of weight,” Hoover observes. “You gotta watch out for everything.” It could take several hours to move a single huge piece.

Crane operators experienced a fair amount of down time: waiting for a particular job to start, or while the crane held something in place for a long period of time—for example, during welding jobs. It was “kind of boring at times,” Hoover recalls. “I’d rather keep busy, instead of sitting there. But I gotta hold it ‘til they weld it all up.” The boom was locked in place, but he couldn’t leave in case something went wrong. “Some days I’d sit there 8, 10 hours doing nothing.”

If winds exceeded 30 mph, the tall cranes were shut down and everything was locked up. But operators remained in their cabs in case conditions improved. Hoover recalls being up there in 70 mph winds: “Scary.” Winds could be unpredictable “right there on the water,” picking up “all of a sudden.” Ice was dangerous as well, especially going up and down the stairs.

Not everyone was cut out to be a crane operator. “You gotta have the knack,” Hoover observes. Sometimes he took trainees up with him. “The height and the noise, if you had something heavy, the cables stretching and cracking, because of the weight you were picking up…. You could hear it crunching. [Once] I turned around, one guy is on the ground. He didn’t like that cracking noise. And the weight, because the crane moves a little bit picking up the heavy stuff.”

Such cable sounds were normal. “If you have a lot of weight, the cable’s gonna crack.” Operators had to make adjustments based on the sound, the weight. Some cranes “ran worse than others.” Like the tendency for cranes to sway in the wind, “You get used to it.”

How would he sum up being a shipyard crane operator? “Whatever comes around, you have to adjust to it.” Hoover enjoyed the shipyard environment. “There’s so much to it. You really gotta be at a shipyard, there’s so much to do. Every day is different.”

Deb Weiner is the Community Engagement Consultant for the Bethlehem Steel Legacy Project. An historian, writer, museum curator, and former community organizer, she has worked on numerous community history projects.