Kindergarten in the Company Town 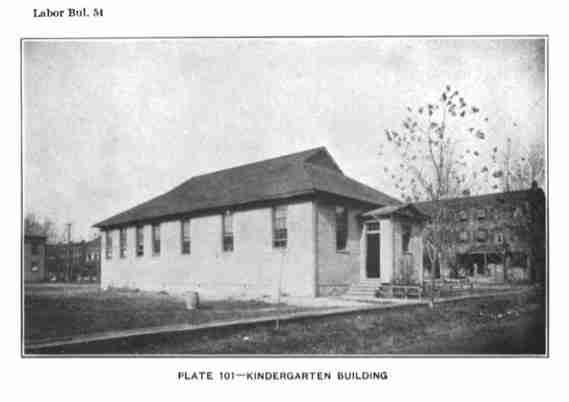 “If you want to see all we recommend in the ideal public school, go to Sparrows Point.”

A company town might seem an odd place to find innovative public schooling, but Sparrows Point’s history provides exactly that. Before Bethlehem Steel occupied the peninsula, brothers Frederick and Rufus K. Wood shaped the Point’s destiny at the helm of the Maryland Steel Company. While Frederick oversaw business and steel production, Rufus focused on the company town. Rufus’ civic vision was based upon morality and work ethic, which he thought could be realized only if the town’s children had access to a quality public education. [2] In 1892, he acted on his vision by opening a Kindergarten. Though ubiquitous in 21st century public schools, the Kindergarten on the Point was novel. Not only was it the first public Kindergarten in the State of Maryland, but by historical accounts it was also the first to open south of the Mason-Dixon Line. [3] In one sense, this school was innovative and pushed the boundaries of State education policies. In another, Wood’s progressivism was tempered by conflicting interests of public service and market forces and between democratic and paternalistic impulses.

The Sparrows Point Kindergarten reflects a broader history of early childhood education in America. When Kindergarten came to the U.S., it largely reflected the philosophical and cultural roots of its ideological forefather: Friedrich Froebel. [4] By the mid-20th century, however, its German character was largely shed and Kindergarten became a typical, or even expected, part of public school. [5] Philosophically, Froebel’s vision was one of religious tolerance and gender equality in the academy. [6] Culturally, Kindergarten was distinctly German, even as it appeared in American churches and private organizations. Students played German games and sang German folk songs. The faculty–called Kindergartners–generally embraced German culture.  [7] The feature that drew social reformers and education leaders to Kindergartens, however, was its instructional style. 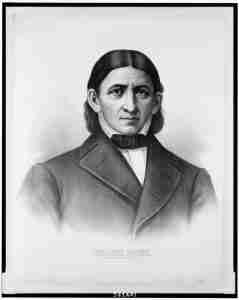 Froebel’s pedagogy was based on freedom, movement, and the inherently good nature of children. Teachers were trained to take nature walks, about the principles of “sense perception,” and spiritual well-being: children learn best when they can explore new, unique objects. [8] Late 1800s social reformers saw these engaging instructional techniques as an opportunity to promote civic welfare amid urban industrial development in increasingly crowded and unequal urban spaces. [9] As its popularity grew, however, school leaders and parents began to question the relevance of German culture and even Froebel’s spiritual focus, particularly for children who grew up in rapidly growing and diversifying American cities. [10] By the 1920s, with increased demand for access to public schooling, nearly a quarter of all schoolchildren had attended a free public Kindergarten that was attached to an elementary school.  [11] Soon, the purposes of the Kindergarten were subsumed into preparation for the higher school grades. [12] Rather than emphasizing Froebel’s democratic possibilities, Kindergarten came to reflect the same tensions found in every public school: balancing preparation for citizenship with that of the industrial workforce. The Sparrows Point Kindergarten reflected these tensions in miniature as Rufus K. Wood attempted to build a morally upright community of laborers within the bounds of a company town.

Sparrows Point’s Kindergarten opened in 1892, just five years after steelmaking operations began and after an elementary school had already opened. Its original home was on the first floor of the town’s public hall. Opening the school was not simply a matter of finding space. Wood had to convince the Governor and state legislature to sign a law that allowed public schools to include Kindergartens. This successful plea was long remembered on the Point, as the pen the Governor used to sign off on the school was displayed in the Kindergarten for decades. [13] Henrietta Marie Armstrong was the first teacher, hired after graduating from a training program in Baltimore. At first, it was slow to attract students. In September of ‘92, only eight children were enrolled. [14] Rufus Wood and the elementary school’s Principal James Blair worked to overcome parents’ concerns that Kindergarten was simply a fad and that their children were too young to learn. [15] Gradually the school gained popularity as parents were thrilled with their children’s experiences under Armstrong’s tutelage. By the end of the first year, over 30 students regularly attended.  [16] In an 1893 letter to the Baltimore Sun, Armstrong reflected on how she “struggled and worked” to maintain the school and entice more families to enroll their children in its first year. Its popularity grew quickly and by 1899 the school employed four teachers and over 130 students. In January 1901, however, disaster threatened the school’s standing when a fire destroyed the public hall that housed the Kindergarten. Perhaps a sign of Rufus Wood’s valuation of the school, the Maryland Steel Company spent $3,000 on a new Kindergarten building at D and 8th Streets that was ready for the first day of school in September, 1901. The company even consulted Armstrong in designing the structure, which measured 70 by 40 feet and included two classrooms and an indoor restroom. [17] The Kindergarten’s popularity only grew in the decade to follow.

Wood and Blair spent years celebrating the Sparrows Point Kindergarten’s contributions to children’s intellectual, moral, and social development and advocating for an expansion of similar education programs statewide. For example, Blair was quoted in the Sun saying, “I have yet to hear a 10-year-old boy of Kindergarten training swear” and that of all who attended that school, “not one has been punished for misbehavior.” Furthermore, both Blair and Wood noted that Kindergarten graduates were best equipped for the intellectual and structural demands of later elementary school grades: they quickly rose to “the head of the class.” [18] Wood, in advocating for County- and State-wide public Kindergartens, also claimed that Kindergarten students had a way of rescuing households beset by “intemperance and despair,” noting examples of dissolute families, “reclaimed by the loving example of a kindergarten child.” [19] In fact, statutes deemed it illegal to sell liquor within two miles of a school, and so Wood’s policy, he thought, would reduce the purchase and consumption of alcohol in the town. [20] Wood’s advocacy was instrumental in expanding public Kindergarten instruction in Maryland. In part, the success of the Kindergarten was rooted in Wood’s achievement of another notable innovation: the first compulsory schooling law in the State of Maryland. [21] Anyone who worked at Maryland Steel were required to send their children to school at least through age 14. [22] He lamented to the County school board that so many children, especially boys, miss out on the benefits of schooling by being forced to work. He therefore put his ideas in practice by compelling all employees to send their children to school between ages six and fourteen. [23] His dealings in education policy netted him admirers in local and state government, which was reflected in his nomination to the County and State school boards. [24] 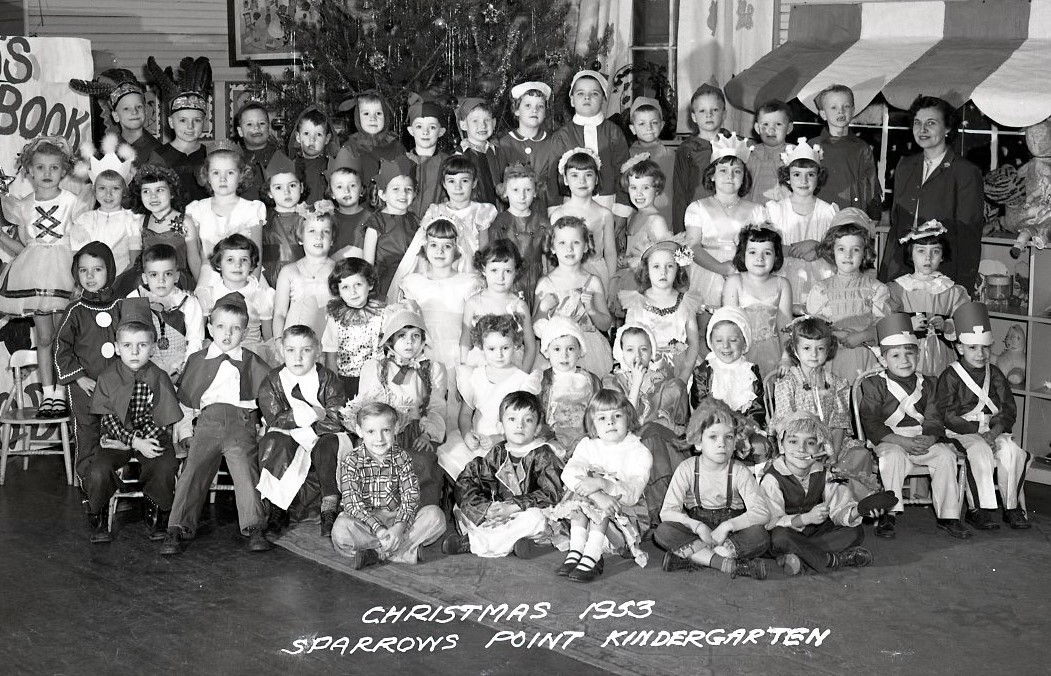 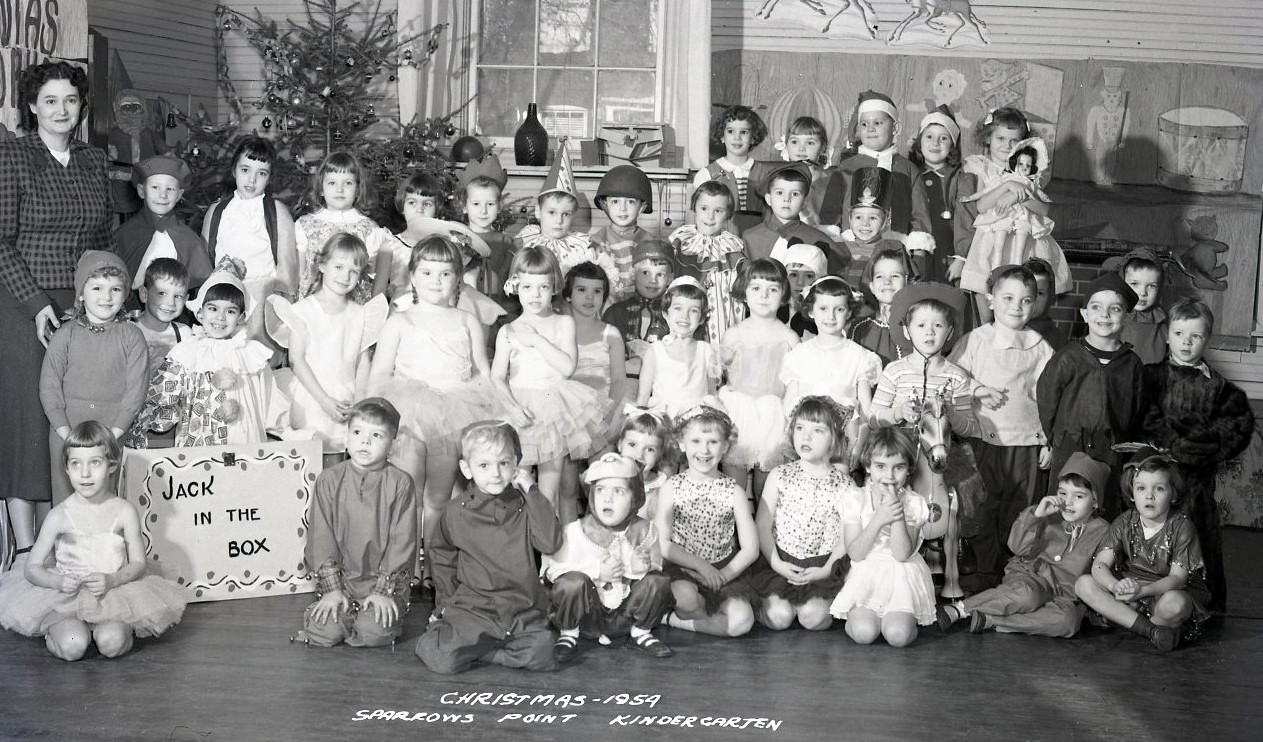 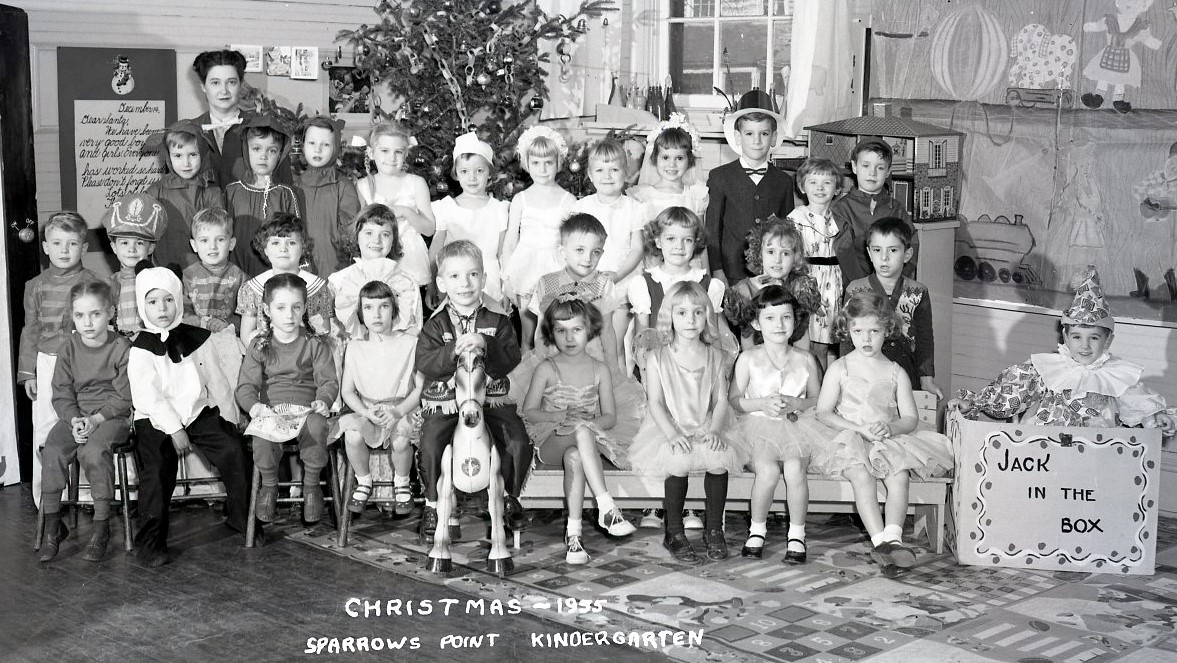 Kindergarten and compulsory schooling was neither the limit of public service provision on Sparrows Point, nor were these creations a fulfillment of a Froebelian vision of social equanimity. For example, residents were serviced by a town police department, sewage, and electricity. However, they did not have a say in these policies as there were no elections or representation. [25] Furthermore, Wood’s social vision for the town was divided along racial and gender lines. Whether there was socialization among Black and white employees while at work, Wood built the town upon a racially segregated map, using a creek as a racial border between two communities. [26] He was careful in public speeches to address this division, once noting that Black residents “have no desire for social community with the whites.” [27] Furthermore, Black and white children did not attend the same schools. Indeed a Kindergarten opened in the elementary school in the Black community on Sparrows Point, but it was neither celebrated nor reported upon in the press to the extent of the Kindergarten for white children. Furthermore, even after Wood’s death in 1909, the purpose for girls’ education remained distinct from that of boys. [28] Wood’s community vision may have been built upon principles of morality, but it was not a democratic morality. Instead, the paternalistic management of the community provided public resources at the cost of voice. [29] Specifically, the Wood brothers sought to maintain loyalty through access to innovative programs and services and reduce the likelihood of protest or intergroup solidarity.

Rufus Wood made lasting educational change in Maryland from Sparrows Point. For Wood, educational innovations like the Kindergarten served multiple aims. It was an early path towards a work ethic and intellectual curiosity among children. It was also a moral foundation for community households. Perhaps more importantly, however, these values were intended to enrich Maryland Steel’s bottom line. The Kindergarten remained open until it was subsumed into the larger community school decades later. However, key leaders like Henrietta Armstrong and James Blair held their posts until the 1930s. They routinely represented the State in national gatherings of Kindergarten societies and were celebrated by visits from the Governor as a symbol of their progressive contributions to education in the state. [30] However, Wood’s community did not receive these public benefits democratically. Instead, Sparrows Pointers were subject to the magnanimity of corporate leaders. Wood’s Kindergarten, like the town itself, therefore occupies interesting territory between democracy and efficiency. The Kindergarten would certainly transmit educational benefits for children and their families. It did not, for instance, change the face of gender or racial dynamics on the Point or in the State, but instead institutionalized and justified these distinctions. Wood’s paternalistic ideals shaped 20th century public education within and beyond the company town with dual and oftentimes competing goals.

Joel Miller is a teacher and graduate student. He lives in Dundalk.

12. Tyack & Cuban, 67. Becoming enmeshed into the schools, Tyack and Cuban noted, also impacted how elementary schools operated. For instance, the influence of the Kindergarten class changed classroom layouts. Elementary schools took to un-bolting school furniture from the floor and replacing them with movable chairs and desks.

22. This rule was especially important for boys, who Wood suggested were too often pulled from school at a young age in Baltimore County in order to support their families.