“Our Hearts Remain in Baltimore”

Excitement was palpable on the museum’s campus in April, 2019, as a 150-ton crane arrived to dismantle the BMI’s Bethlehem Steel crane for painting, and the scaffolding started to climb. But this wasn’t the first time the crane had been taken apart for restoration and painting.

In fact, remembering the crane’s arrival on the BMI campus in 1989 is what inspired Sandy Baklor, together with his wife Arlene Kaufman, to support the campaign to Save the Crane. Their gift brought the BMI significantly closer to being able to light the crane once it was restored and painted.

Sandy recalled that after Bethlehem Steel’s Key Highway shipyard closed in the 1980s, the crane was dismantled and floated down the harbor to the BMI campus. Then, it was stripped and painted before being reassembled in its new home in front of the museum.

A founding member of the museum’s board of trustees, it was Sandy who secured the gift from philanthropist and sporting goods entrepreneur Howard Head that made it possible to paint the crane the first time, when it was acquired thirty years ago.

Sandy and Arlene now make their home in Palm Beach, Florida, but took time to stop by during a visit to Maryland. “Looks like the crane needs some work,” Sandy commented a wry chuckle, as he observed the work in progress.

And thanks to Sandy and Arlene’s generosity—and the generosity of so many donors throughout our community—that work is almost complete. 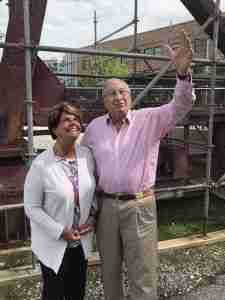 Read, Standing Proud: A History of the Whirley Crane
to learn more about the largest artifact in the BMI’s collection. 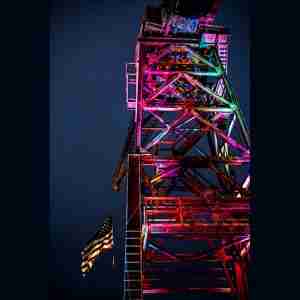 Standing Proud: A History of the Whirley Crane