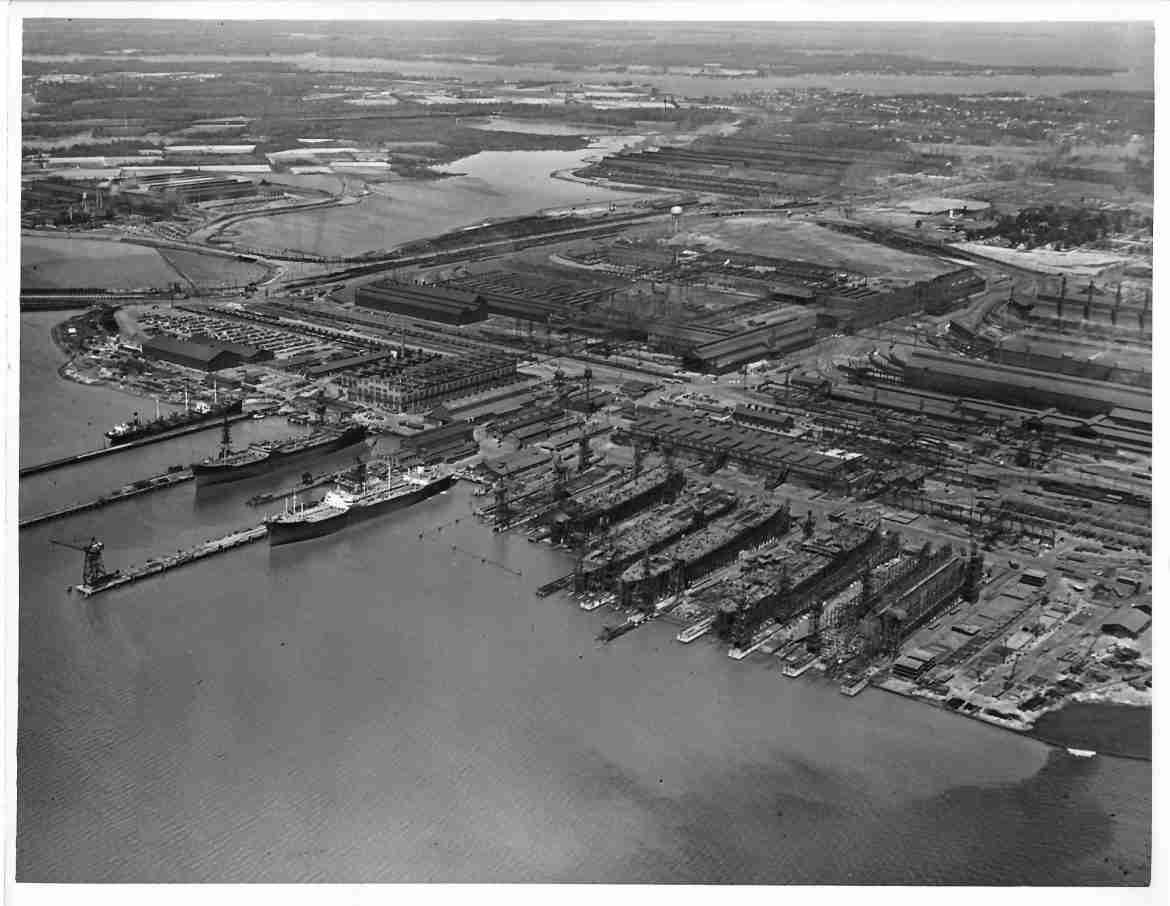 This c. 1949 aerial photo illustrates the shipyard’s proximity to the steel plant.

As mentioned in my previous posts on the Baltimore Yards and Fairfield Yard, I have been helping process and catalogue the BMI’s Bethlehem Steel collection. As I do my work, I find myself reading the materials or closely looking at the photos I am processing. I’ve become fascinated by this collection of shipyards–Sparrows Point, the Baltimore Yards, and Fairfield–and the contributions they made to local and global commerce as well as the major role they played in national defense. In this post we’re going to take a look at the Sparrows Point yard. 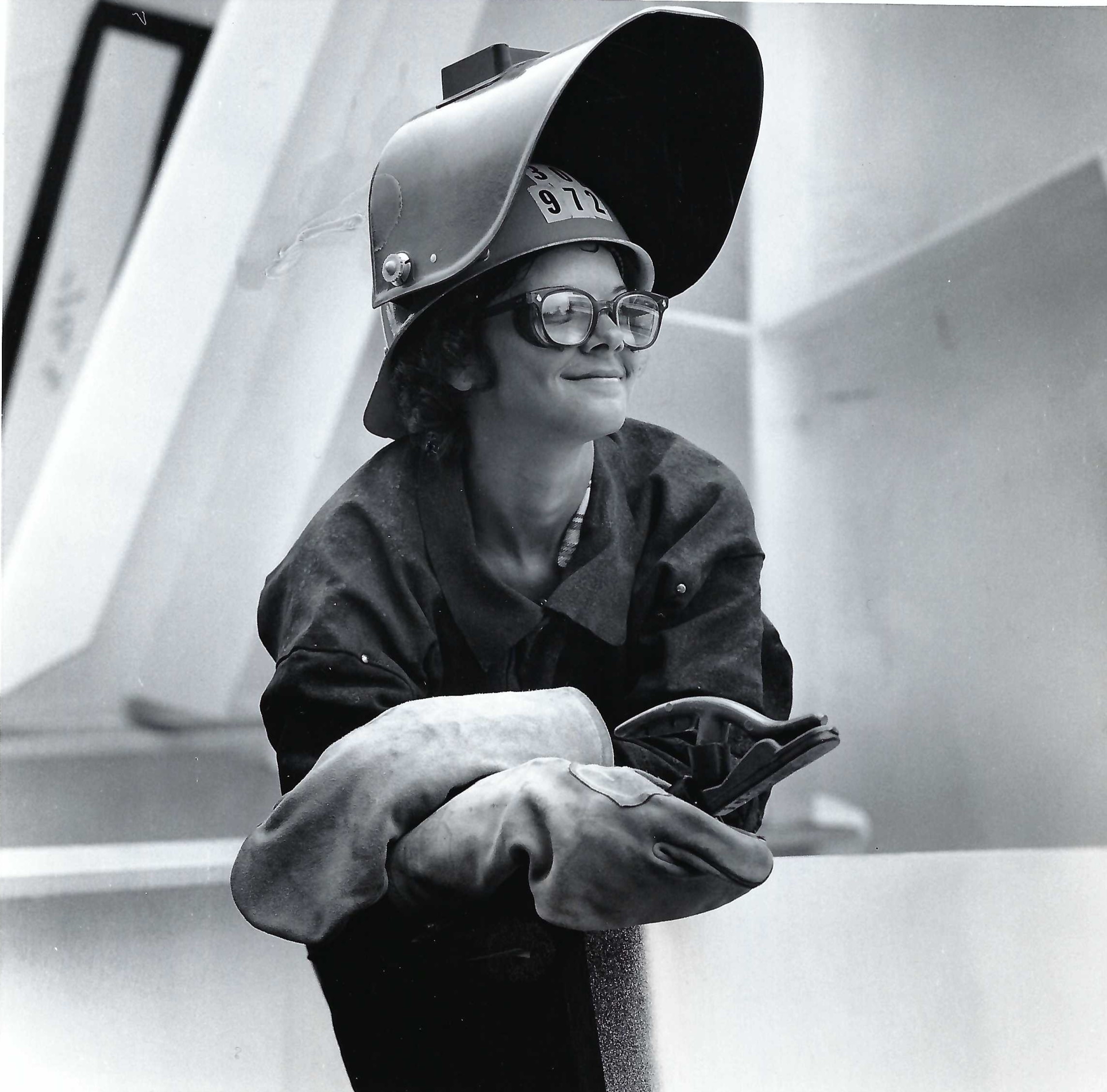 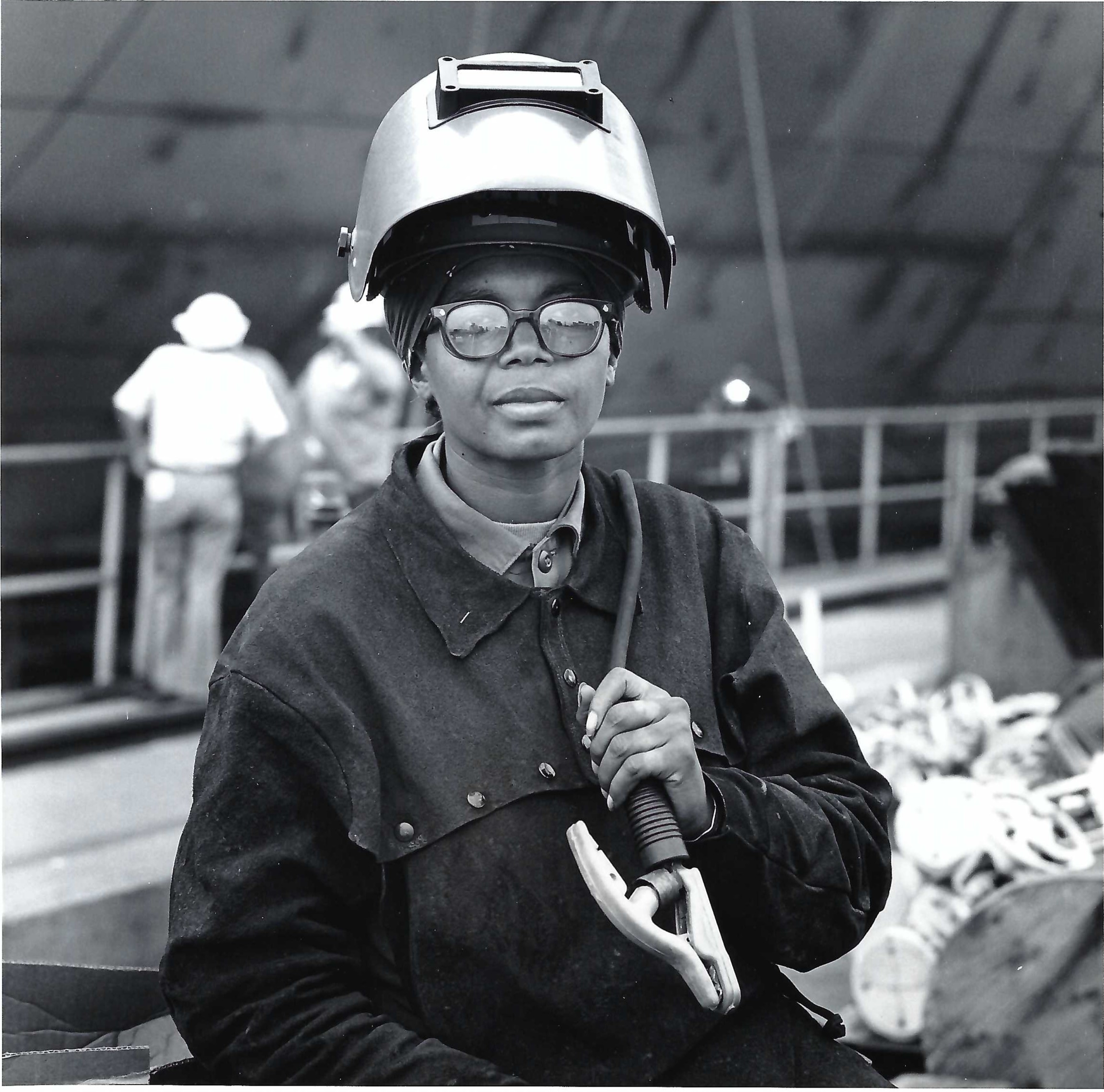 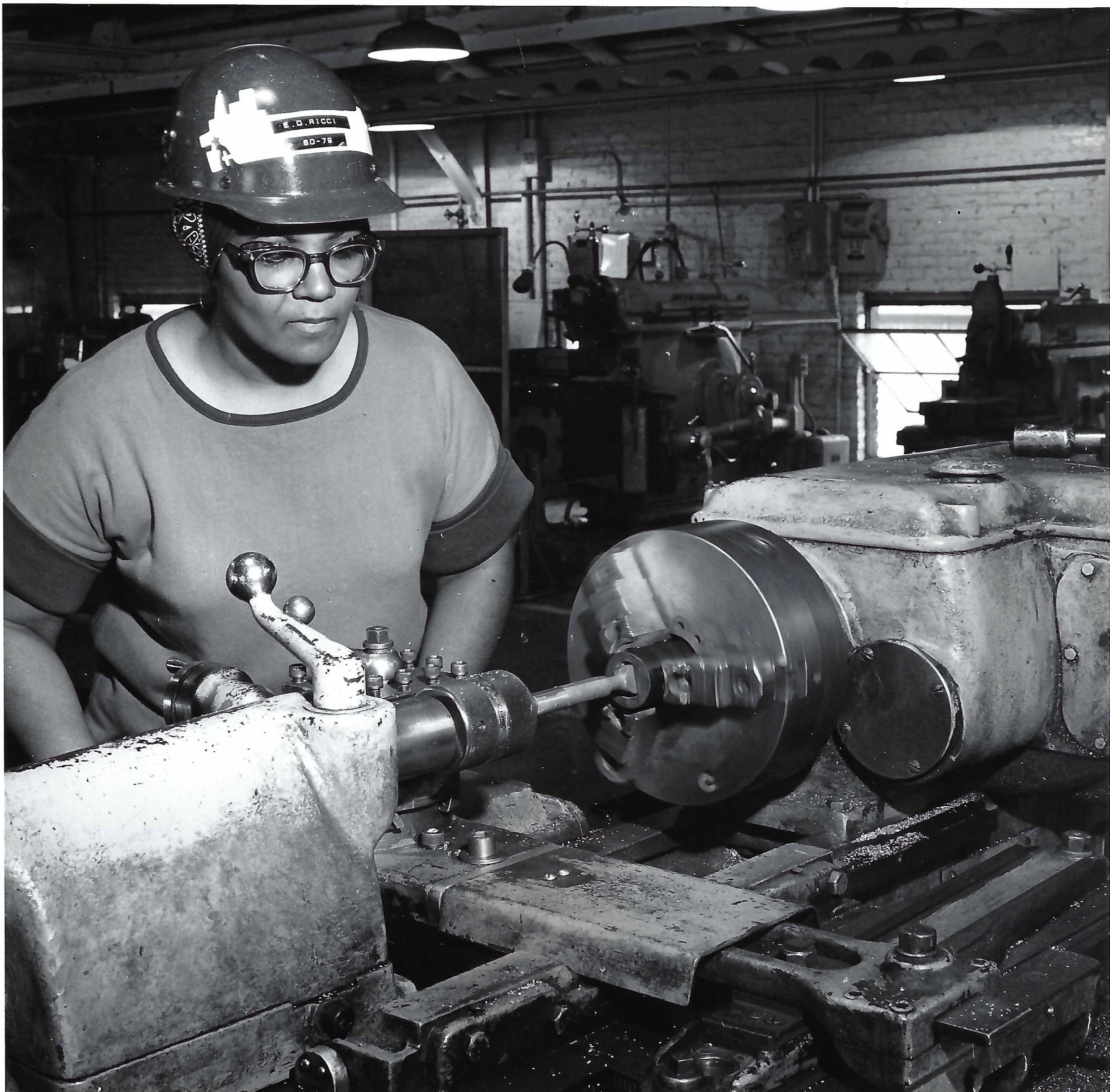 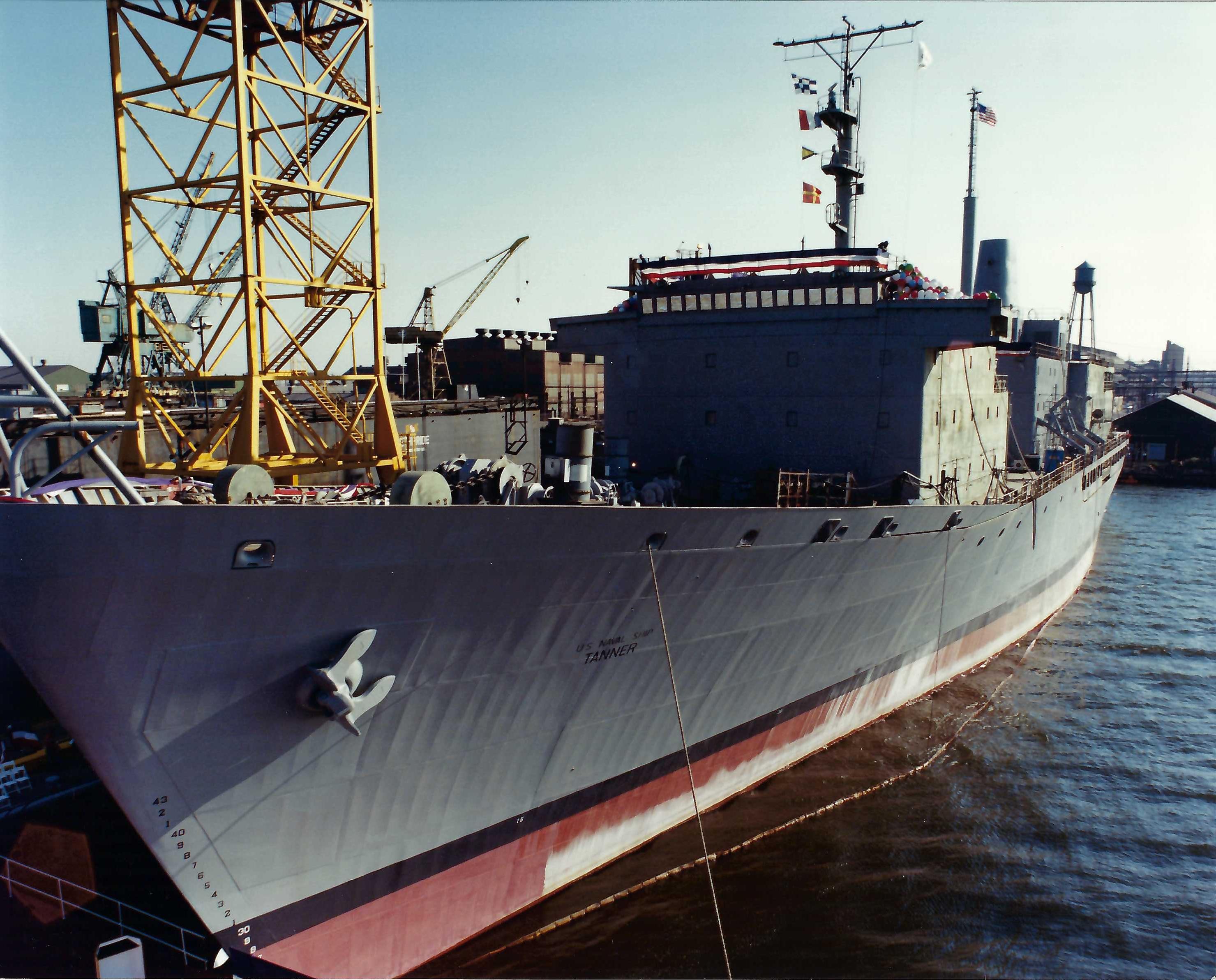 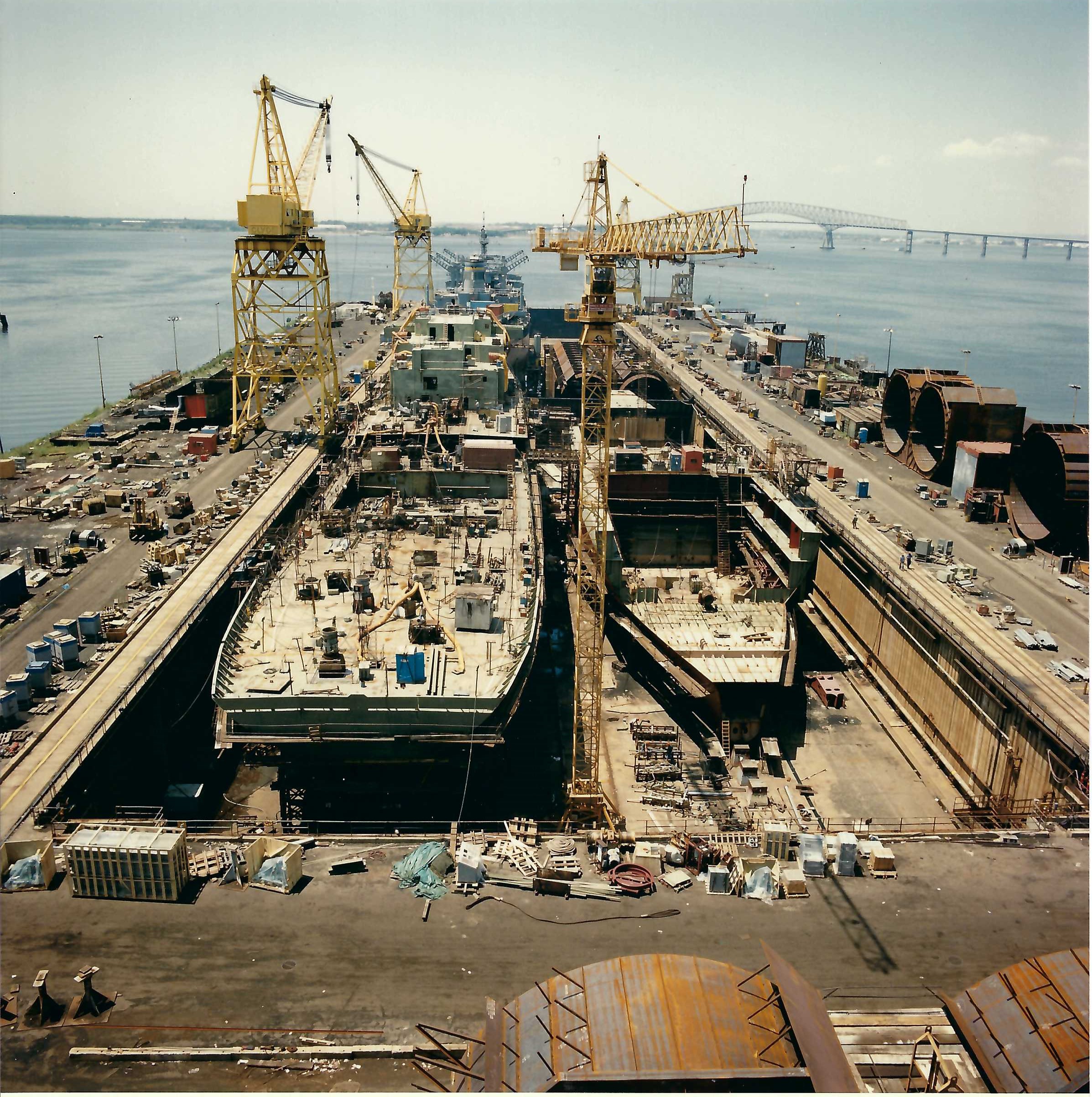 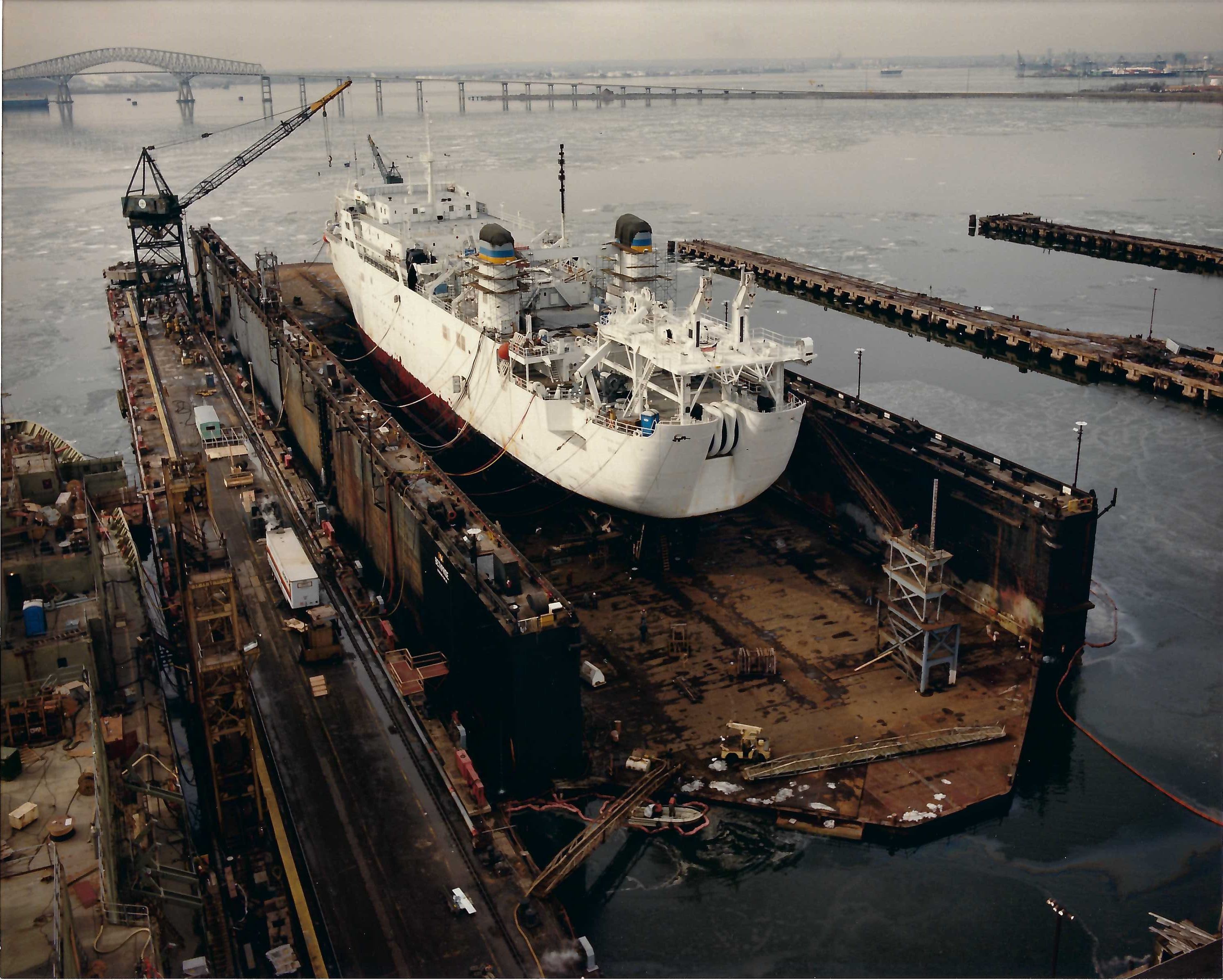 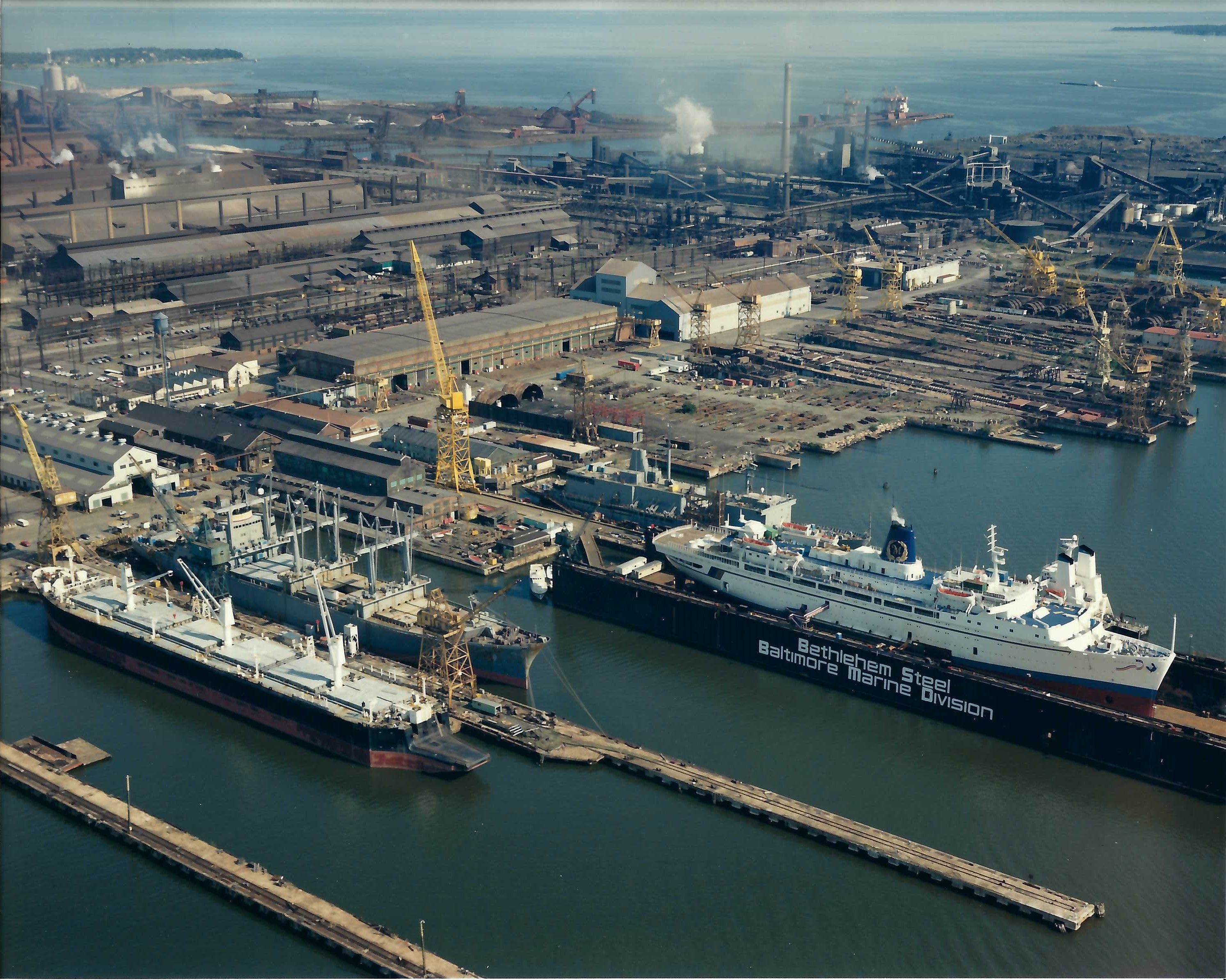 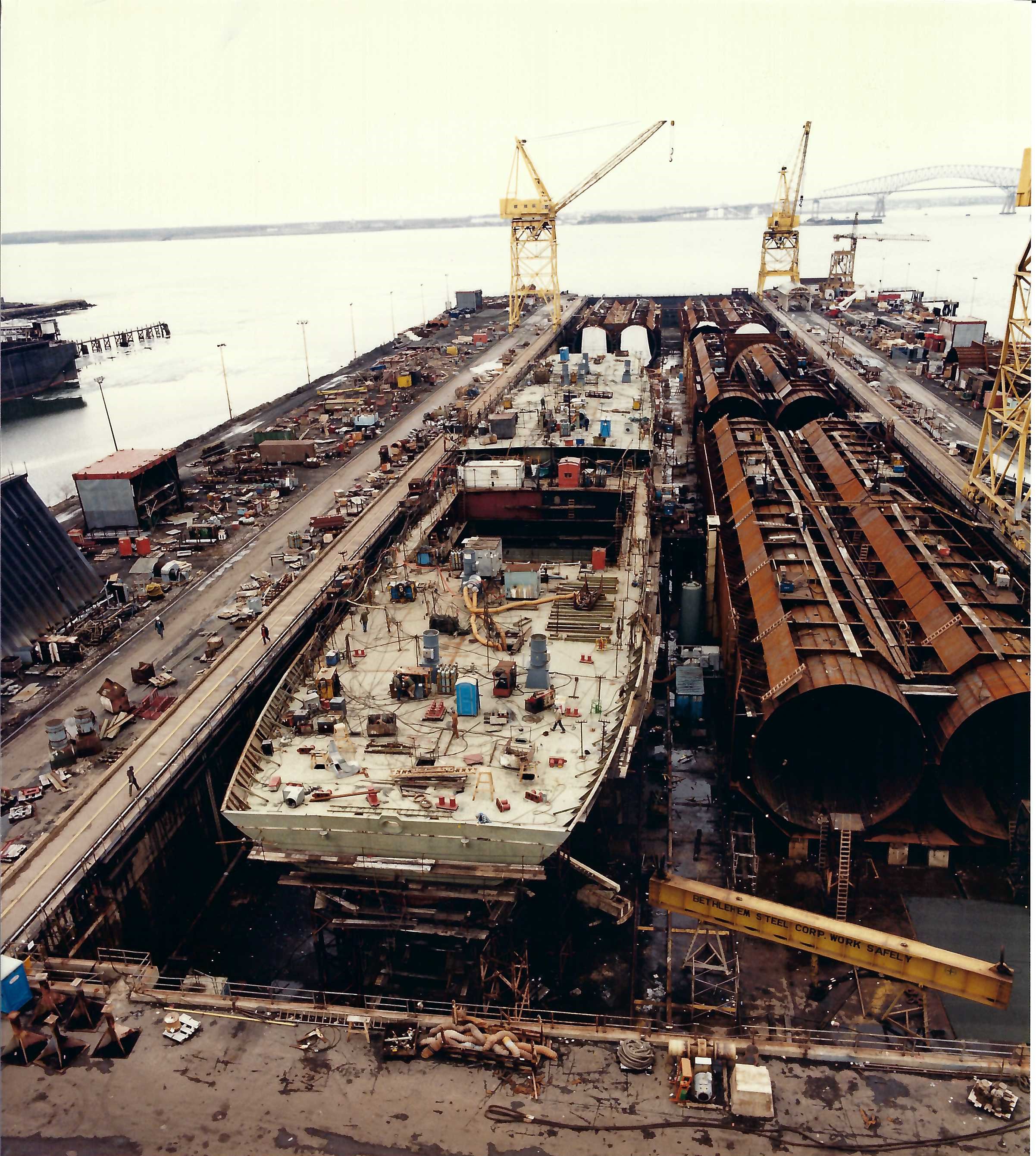 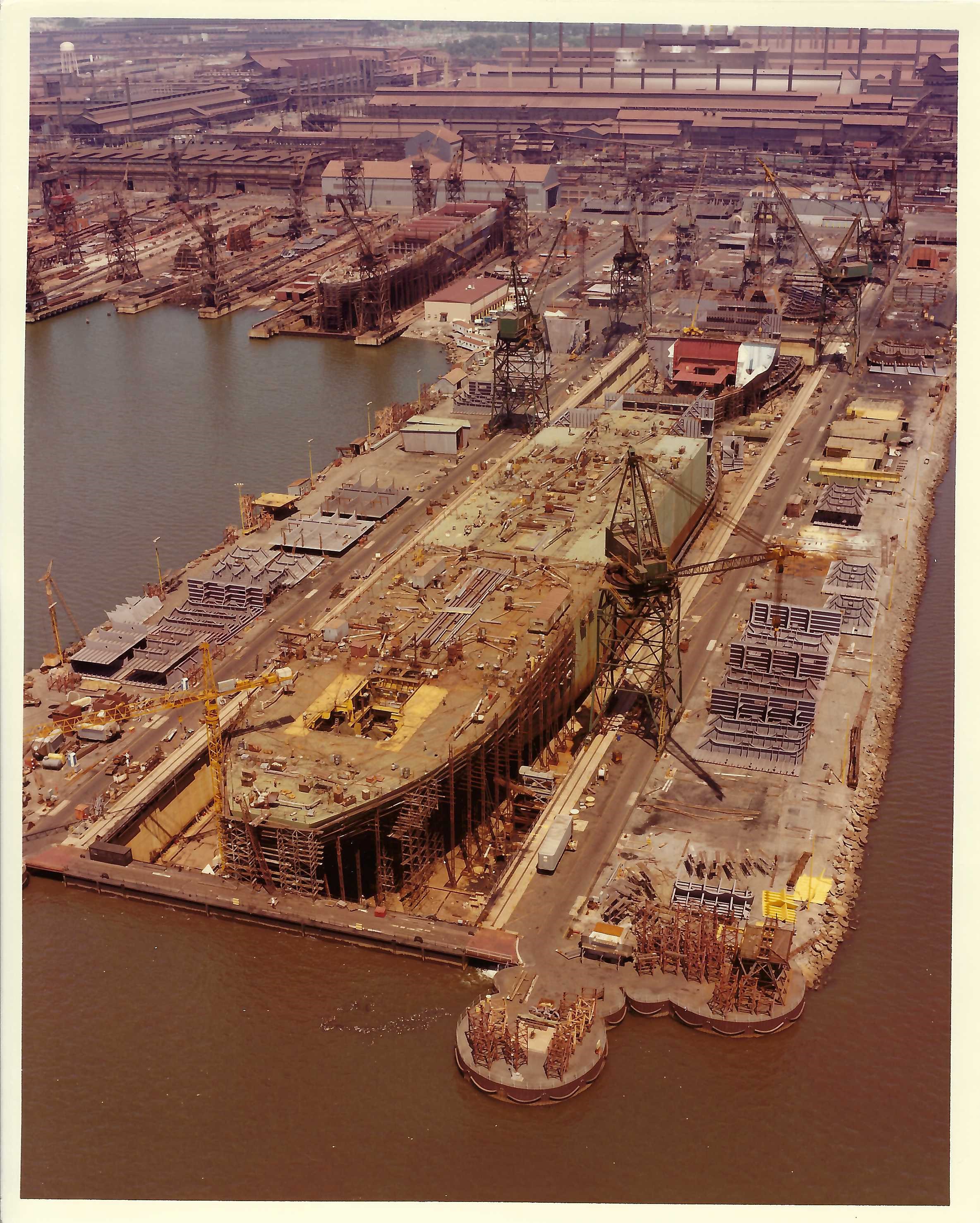 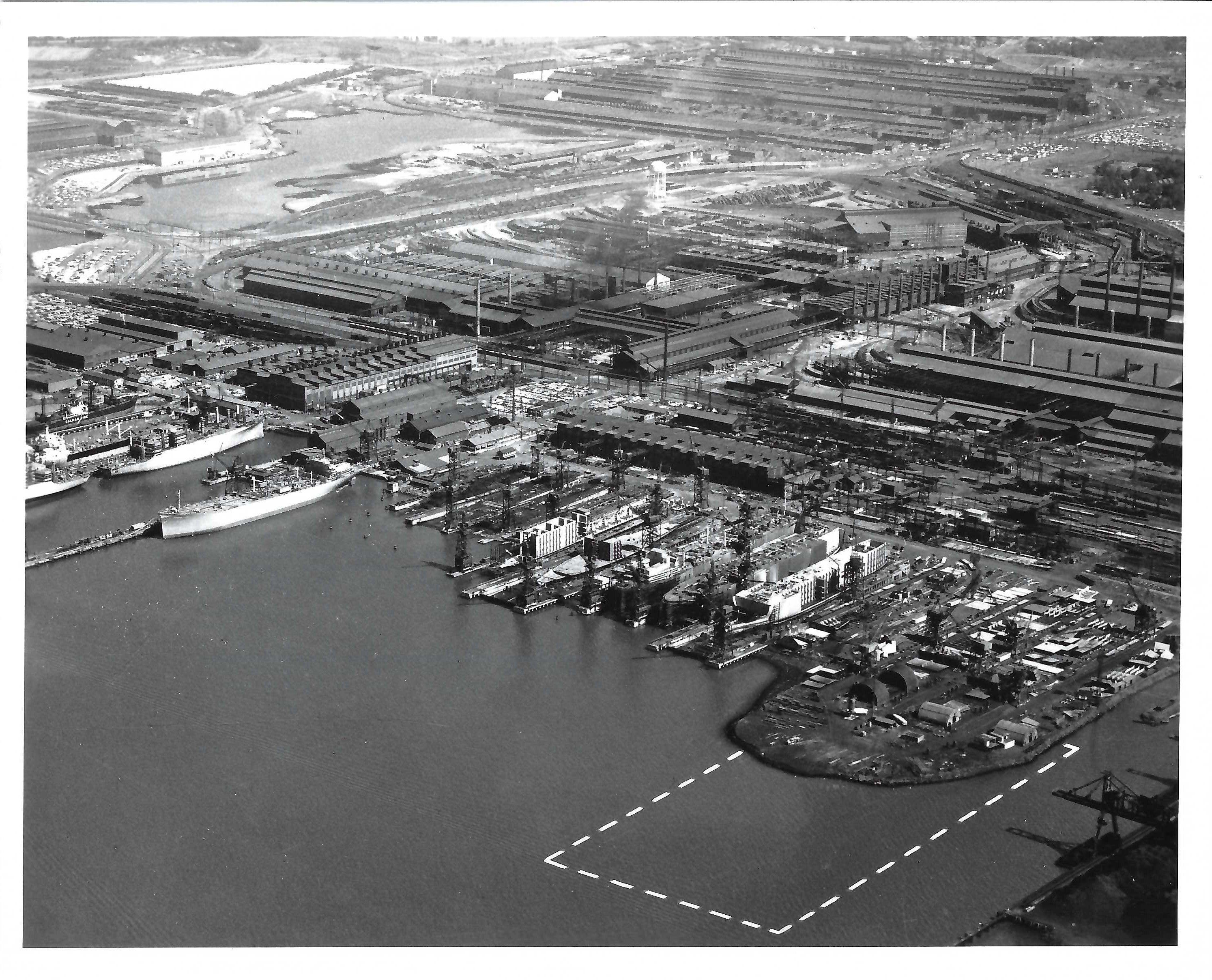 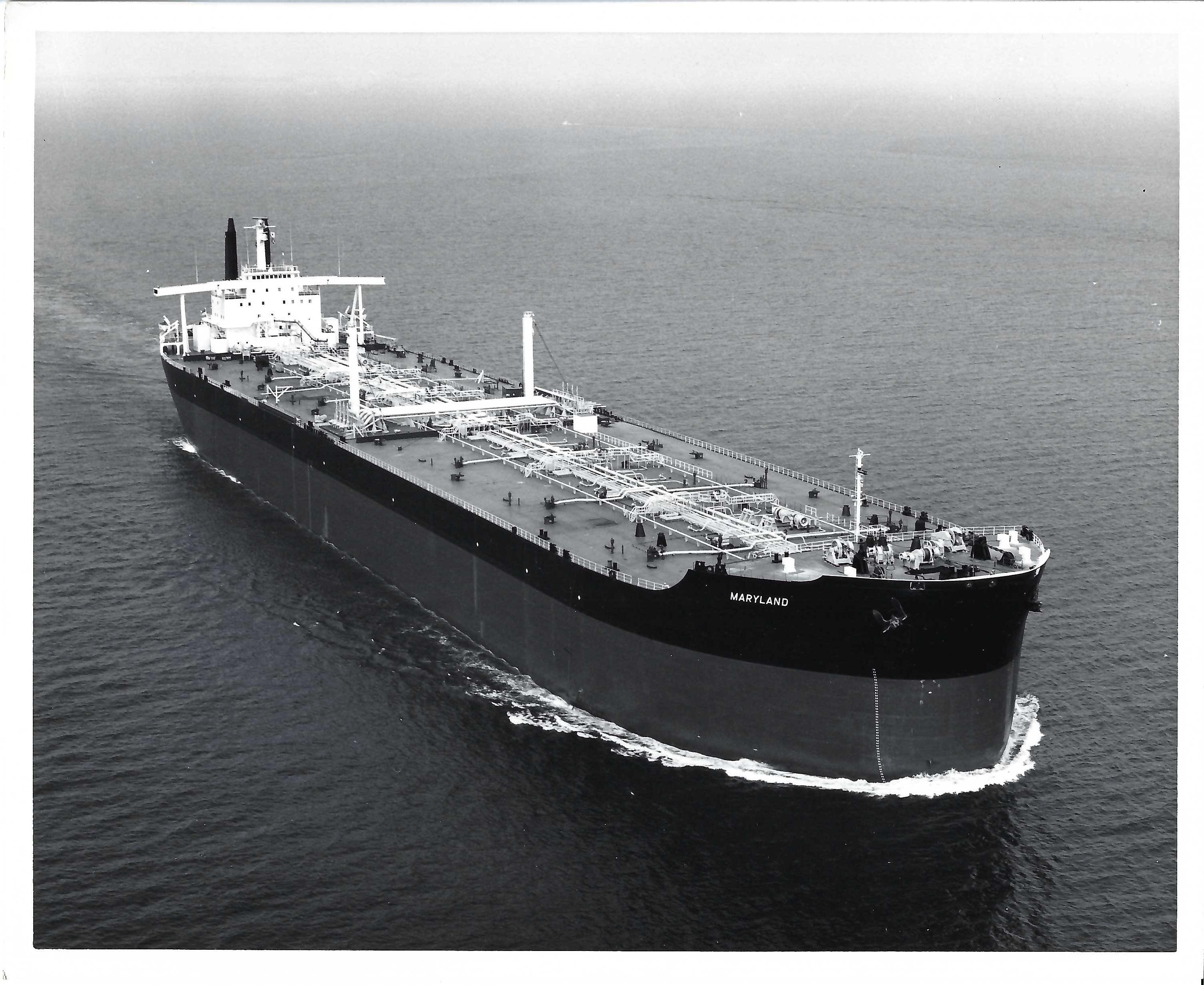 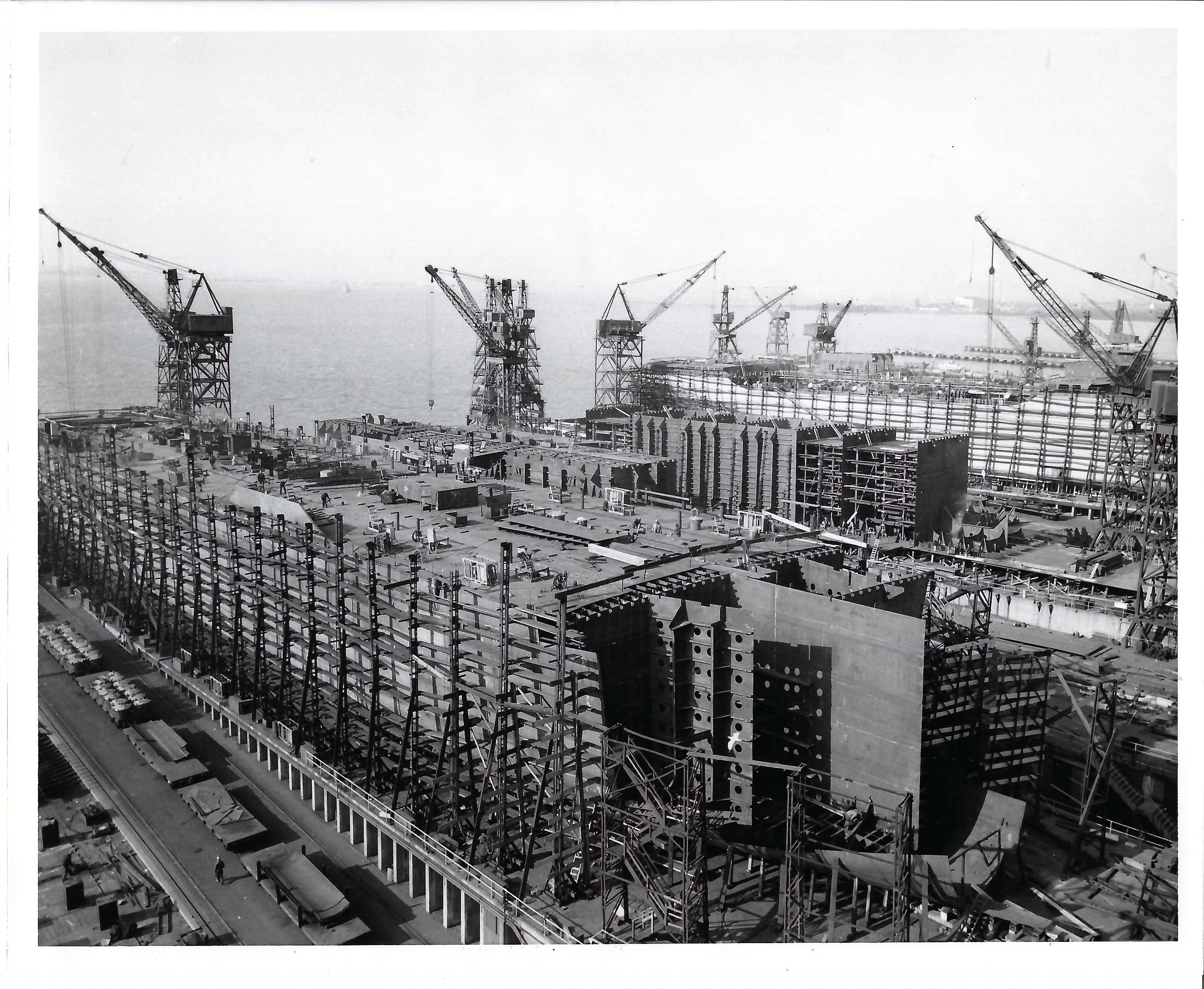 The Sparrows Point yard was established in 1891 by the Maryland Steel Company. Maryland Steel built tugs, coastal passenger vessels, dredges, cargo ships, and a few destroyers. One famous vessel constructed in this early period was the SS Ancon, built for the Boston Steamship Company and launched as the SS Shawmut in 1901. The SS Ancon holds the distinction of being the first ship to officially transit the Panama Canal in 1914.

The yard was acquired by Bethlehem Steel in 1916 as part of the purchase of Maryland Steel. Occupying 200 acres on the east side of the Patapsco River where it meets the Chesapeake Bay, the yard had two unique advantages: it was strategically located near Baltimore’s busy marine terminals, and its source of steel was the adjacent Bethlehem Sparrows Point mill. It was one of the few places in the world where a shipyard was located that close to the source of its main building material.

The Sparrows Point Yard was primarily used for constructing new vessels. It was a major merchant shipbuilder in World War I and between the wars. It was fully operational at the beginning of World War II and built ships as part of the United States Maritime Commission’s Emergency Shipbuilding Program to help rebuild the British Merchant Navy that was being decimated by German U-boats. It continued to build tankers and dry bulk carriers for private-sector customers throughout the war. During WWII the yard constructed 101 vessels of 16 different classes and employed as many as 8,000 workers.

The Sparrows Point Shipyard was among the most active yards in the nation during the 1950s and ‘60s, building tankers, freighters, and container ships. In 1953, it led the world in new ship construction by delivering over 216,000 deadweight tons (dwt). An equally impressive mark was achieved in 1969 when the yard delivered six merchant ships with more tonnage (227,008 dwt) than any other American yard.

A significant reason for the success of the yard during this time was the world’s growing demand for crude oil and the tankers needed to transport it. Beginning with the construction of 28,000 dwt tankers in 1949, Bethlehem developed 10 standard design tankers–making the Sparrows Point yard a dominant player in the tanker market. This dominance of the tanker market continued into the mid-1970s. According to company accounts, almost without exception, the lead ship of each design class was the largest tanker built in the United States up to that time. Reflecting the yard’s continuous innovations in the design of crude oil carriers, the Sparrows Point yard was characterized in company literature as the “Patriarch of U.S. Tanker Builders.”

The closing of the Suez Canal from 1967 to 1975 resulted in the elimination of a size restriction on the tankers. Answering to market demand, Bethlehem built larger tankers culminating in the construction of the 265,000 dwt very large crude carrier (VLCC) tanker class vessels including the Maryland, the Massachusetts, and the New York.

To maintain its leadership position, the company made major investments in the yard beginning in 1970. The building ways and outfitting piers were improved, a new blast and paint shop was constructed, and a new panel shop that featured automated welding and material handling was added. The most significant improvement was the construction of a new flexible building basin. At 1,200’ x 200’ the basin was one of the largest building basins in the United States. It could accommodate vessels up to 300,000 deadweight tons. The basin featured an intermediate gate that allowed it to be divided into two sections providing the flexibility of accommodating multiple vessels at the same time. Although dry dock or graving dock are the commonly used terms, the company consistently referred to this as a building basin, I am following their lead in that regard.

The 1980s saw a dramatic change in the U.S. shipbuilding industry. Where in 1975 the industry produced 75 commercial ships, in 1985 it produced five. The major factor in this decline was the elimination in 1981 of the Construction Differential Subsidy (CDS) provided by the United States Government. The CDS covered up to 50 percent of the additional cost to build ships in a U.S. shipyard instead of a foreign yard. The money was paid by the U.S. Maritime Administration (MarAd) directly to shipyards and/or shipowners, and was only allowed to go toward the construction of U.S.-flag ships in international trade.  Without these subsidies the U.S. shipbuilding industry was not able to compete with foreign shipyards that continued to be supported with subsidies from their governments.

Considering these changing market conditions Bethlehem closed the Baltimore Yards at the end of 1982 and consolidated all shipbuilding, conversion, and repair at Sparrows Point. To accommodate the relocated ship repair business, a large floating dry dock with a lifting capacity of 40,000 tons was moved from the Key Highway yard to the Sparrows Point yard. With these moves, the yard began to actively pursue ship conversion and repair work in addition to ship construction.

In addition to numerous dry-dockings and repairs on commercial and Naval ships, five roll-on/roll off ships (RO/ROs) were reflagged, and numerous commercial, cruise, and naval vessels were overhauled and given an extended life. An interesting project completed during this time was the conversion of three RO/ROs previously owned by the global logistics company Maersk. They were converted to Maritime Prepositioning Ships for the U.S. Navy’s Sealift Command. The former Maersk Estelle, Emma and Evelyn were converted to the CPL Louis J, Hauge, Jr., the PFC James Anderson, Jr. and the PVT Harry Fisher respectively.

The Sparrows Point Shipyard was once part of a chain of 17 shipyards operating under the BethShip name. In 1990 it was the only remaining yard. The last newly constructed ship (USNS Tanner) was launched in 1990. In a 1992 reference, the company stated that nearly 600 new vessels had left the Sparrows Point Shipyard on their maiden voyages and many more had been converted or repaired in the yard.

Today the Sparrows Point Yard, along with the former steel mill property, is being transformed into Tradepoint Atlantic–a 3,300-acre global logistics center, featuring a combination of access to deepwater berths, rails, and highways. We are grateful to Tradepoint Atlantic for their generous support of the Bethlehem Steel Legacy project and their commitment to honoring the men and women who worked at Bethlehem Steel.